True stories of Big Government crawling all over you – I get a new set of these every month. Here is last month’s…

An 11 year old named Skylar Capo rescued a baby woodpecker from an attacking cat in Fredericksburg, VA. The kid was with her mom and planned on just taking care of the bird for a couple of days to make sure it was okay, and then release it. On the way home they stopped in a store and a U.S. Fish & Wildlife Service officer happened to be there. The officer told the kid it was a violation of the Federal Migratory Bird Act to transport a woodpecker. As soon as the mother and daughter got home, they released the bird but that didn’t stop the government assault on them. The same officer showed up later at the Capo’s house and slapped them with a $535 fine. 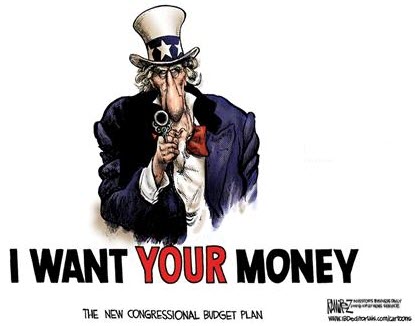 Taxpayers in Salinas, CA are furious that Democrat Mayor Dennis Donahue threw $540,000 of local tax payer money in “community development” grants along with $187,000 from the California Energy Commission to a “green car” startup company. The company, Green Vehicles, designed a $25,000 electric three-wheeler with a 100 mile range and came to Salinas promising the generation of $700,000 in tax dollars per year and 70 new jobs.  Oops. In July the company declared bankruptcy and informed the Salinas city council by email. The government hacks in Salinas defended their position saying, “We had good intentions.” Awwww…all liberals have “good intentions” as long as whatever money they throw away is YOURS.

Medicaid and food stamp recipients are now eligible for free cell phones – along with 250 free monthly minutes. How it works – all U.S. telecommunications providers are mandated to pay a quarterly “contribution” – which totals $4 billion a year – to the Universal Service Fund (USF). This fee is passed directly to the consumers…you. This welfare program was created by the USF to provide free phones and minutes to welfare recipients, and as spokesman Gary Carter says, “The program is about peace of mind. It’s one less bill that someone has to pay, so they can pay their rent or for day care. It is a right to have a peace of mind.” Hear that? Government says people now have a “right” to a peace of mind. But YOU have to pay for it. Your rights to keep what you work hard to earn…are irrelevant.

The countdown continues for the ban on normal incandescent light bulbs in 2012. When the ban goes into effect, we will be forced to use those stupid curlicue compact flourescent bulbs even though there is enough mercury in each one, according to the EPA, to contaminate 6,000 gallons of water. The EPA has published an instruction book for what you need to do if you break one in your house. The instructions include turning off the heat or A/C whenever you break one to prevent circulation of the contamination, and also whenever you vacuum the contaminated area in the future. Ironically, in 2005 the EPA banned the use of mercury lighting outside of your house because they classify mercury as a “hazardous material.” So there you have it, Big Government and the Feds banning mercury bulbs outside your house to protect the environment and forcing you to use mercury bulbs inside your house to protect the environment.

Can you imagine what would happen if these stories, and there are hundreds of them every month, were reported every night on the six o’clock news? Everyone would become so angry at Big Government and want less of it. So why don’t we ever hear about these stories on the news? You just have to say, Hmmmmmmmmmmm…..

The more you keep voting for Big Government, the more Big Government you get. It’s up to you what you want. More of this, or less?