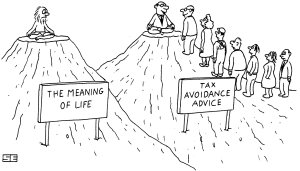 So there’s a big deal being made about rich people like Trump that avoid taxes. Well I’m here to tell you something. If you take even a single deduction on your income tax return, you’re just as evil.

While something like your earned income tax credit or your mortgage insurance may be a few hundred or a few thousand dollars, that’s only because you’re a little guy like me. What difference does it make if thousandaires avoid thousands in taxes and millionaires avoid millions in taxes?

If you are upset about that, then drink your own Kool-Aid. Fight the IRS to eliminate credits and deductions. But here’s the rub, practice what you preach. If you want to eliminate these deductions for millionaires, then you better be willing to eliminate them for yourself too.

But I know that will never happen. I’ve seen how crappy humans are to each other. I remember not long ago there were two propositions on the CA ballot to provide more money for schools. One was a tax on everyone in the County, the other was a tax on just rich people. Guess which one passed. That’s because humans are shitty. They are happy to tax and take from people that make what they wish they could make, and give it to themselves or other people they think should have it, even though they don’t share any of their own money to do it.

So if you are going to hate the wealthy for LEGALLY using the same tax avoidance strategies that you do, then go find a tree, tie yourself to it and find someone to horse whip you too for doing the exact same thing.

Read more about why avoiding taxes is honorable here.