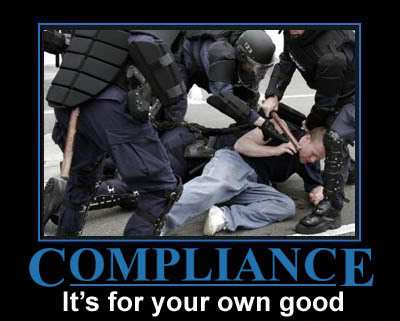 A caller confronts the police in Connecticut, reminding Lt. J. Paul Vance that he took an oath to the Constitution and an unconstitutional law is no law at all.

“You’re going to speak to me this way, somebody that pays your salary? You’re a servant, you serve me. … You can refuse to follow unlawful orders!” replies the caller.

So…a State Police force is now educating those they were supposedly sworn to protect, that they are in fact our masters and we are their servants. So to put it a bit more succinctly, but perhaps crudely, so I can drive the point home more effectively, the Connecticut State Police Public Information Officer just told every mom, dad, son and daughter in Connecticut that they are all now the police’s bitch. How does that feel? To have your money violently ripped from your paycheck every week so it can subsidize a group of gun-wielding individuals who looks down on you as their bitch and will exact whatever level of violence and force upon you that it takes to get you on your knees and submit to their will?

I believe this now qualifies as an officially recognizable tyranny in the State of Connecticut. Thomas Jefferson advised us long ago that it is not just our right, but our duty, to disobey unconstitutional laws. The whole point of police and other civil servants swearing to uphold the constitution is because the politicians often do not, and they will pass unconstitutional laws, and the last line of defense (before Jury Nullification, where WE say a law is no law at all) are the enforcers of those laws, and it is to their oath that they must fall back on to reconcile their ethical dilemma.

Otherwise, what is the point of that oath at all? If the politicians passed a law banning free speech, guns, movement and private property, then the police, according to Lt. J. Paul Vance, should enforce those laws, no matter how egregiously unconstitutional they are. Are we to wait for the many years it will take for a court system to sort it all out while everyone is being rounded up and thrown in jail? A court system like ours which has been so corrupted and compromised that legislating social democracy from the bench is more important than upholding constitutional laws? These are the reasons why the oath means something, and why it is not just some pretty line of bullshit we can puff our chest out at when we hear it hoping the day never comes that we must actually stand up for it.

What the hell then is the purpose of the oath, exactly? Actions are based on ideas and ideas are communicated with words. The oath is to commit their life to an idea, that when threatened requires action. Failure to fulfill the commitment to this oath creates just another Stormtrooper faithfully serving the Empire.

And what law was the caller so distraught about? A law that turned her husband into a felon for committing no crime at all.

With the stroke of a tyrannical pen, the State of Connecticut has created 350,000 felons, many of them fathers, mothers, husbands, wives, sons, daughters and good neighbors.  They are just regular American people that go to work in the morning, BBQ on the weekends, pay their Government land rent (property taxes), and take their kids to Mystic Seaport in the summer. All these moms and dads are now Class D felons and Lt. J. Paul Vance, being their master (his words, not mine), will eventually come get their guns (well, he won’t do it himself, he has other Stormtroopers for such menial tasks, also his words, not mine).

This new wave of criminals is roughly 20 times Connecticut’s current prison population. By banning guns that have certain physical features, of which many Connecticut moms and dads are the owners of, Connecticut has made criminals of a significant slice of their populace, many of them families, overnight.

What this means is that 350,000 moms and dads and others are refusing to back down. They are returning to their patriotic roots. They are finally coming together, as one unit of disobedience, a unit that is immune from “government by division.” They will not be divided by race, or class, or religion, or geography, or culture. The Government’s playground tactics to get citizens to turn on each other and distract them from uniting into a single force will not be possible. The People are upholding the oath the officers sworn to protect them have abandoned in exchange for protection and wealth from the State.

When citizens come together, united, and reject Government’s attempts to fragment them and more easily control the scattered pieces, it becomes possible to create fear, and real terror for those in the Government. The Government never wants to see 10 million people march on Washington, or see millions of Americans just stop paying their income taxes at the same time, or see the brains of America leaving the country and denouncing their citizenship or see Americans buying up tons of gold.

The Government never wants to see 350,000 Americans cry out, “Molon Labe” when their guns are confiscated, by fiat, from the comfortable ivory tower of unilateral political violence they call a capitol.

The elitists in the Government, the altruistic, sentimental, power hungry, greed infested, political dogs of war that understand they must disarm the population in order to continue their rapid expansion of power, consolidation and control, have finally run into a force of freedom loving individuals that refuse to succumb to the Government’s violence and use of blunt force to cripple citizens and bring them to their subservient knees.

I’m proud of every single one of them.

We say: Bring it on. The officials of the state of Connecticut have threatened its citizens by fiat. They have roared on paper, but they have violated principle. Now it’s time for the state to man-up: either enforce its edicts or else stand down and return to the former laws that did not so violently threaten the citizens of this state.