Home › Random Thoughts › How to drive 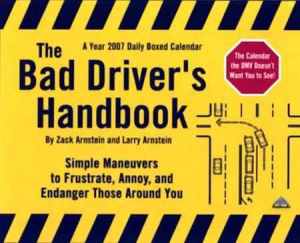 Sorry, this is off the usual topic for an angry woodchuck, but the last 24 hours have pushed me over the edge.

In my 40+ years of existence, 22 of them on the road, with seven cross country trips under my belt, 400,000 miles on my truck and having driven many times in downtown Manhattan, Los Angeles and Rome (where driving requires an adult diaper) , I have determined the most dangerous, inconvenient and rude problem with drivers on American roads is…failure to use a turn signal.

First off, everyone in Southern California does 70 mph; doesn’t matter what the speed limit is, 55 – go 70, 65, go 70, 70…well…go 75, and that’s across all lanes with the occasional exception of the slow lane, and for the most part, we are all used to it, prefer it that way, and most SoCal drivers, by and large, are good drivers.

So last night, heading home, I’m in the fast lane at 70. I have to go three lanes over to get to my exit lane and I have a clear line of passage at a 45 degree angle around the cars. I put my blinker on, check my blind spot, and start crossing over, first lane, second lane…from the second lane I see a woman driving a minivan holding a sandwich up to her maw with her left hand cruising at 70 on the entrance/exit lane next to where I am going. I drill into her socket balls waiting for what I expect her to do and low and behold, she does it. She casually drifts left out of her lane into the lane I am going into, not a care in the world, oblivious to the 4 tons of potential mangled metal, body parts and sound wall splattered blood she is ignorant of,  and only because I anticipated her stupidity was I able to straddle the lane, accelerate and get in front of her. Problem here? There are two. First, I had to focus an inordinate amount of attention on her eyeballs instead of watching the rest of the road around me for other potential problems leaving me at the mercy of other drivers skills. Second, she was busy stuffing her hole with a nummy-yummy sandwich so she could not be bothered to check her blind spot to notice my two tons of incoming steel and react to that, or turn her blinker on so I could avoid using that lane by being informed of her intentions.

Ten minutes later, I am driving in the fast lane on the street towards my house when a car, for no reason, at 2/3 my speed, just changes lanes and cuts me off. I had to brake hard just to avoid an unintentional pit maneuver. No blinker, nothing. And to make it worse, no clear reason why they did it. There was nobody in front of them in the other lane going slower. They did not continue to cut across to make a left somewhere. It was like they purposely got in front of me just because they wanted to and they wanted to do it in the most dangerous way possible.

This morning, I was trying to turn left across traffic onto a busy street. I see an opportunity, but an SUV is coming towards me from the left. It’s taking longer than anticipated to get passed me. I see my window of opportunity closing as the opposing traffic is coming towards me. The SUV seems to take even longer to get to me. The SUV slows down to almost a complete stop right where I am and turns casually into the street I am coming out of just as the window for me to turn slams shut and I am stuck there another 4 minutes. And why? Because the &^$#@*  driver of the SUV could not be bothered to turn on their signal and let me know they are not part of my equation to turn out of the street.

Later this morning, I am coming up to a stop light, traffic is tight, I have a nice buffer between me and the car in front of me to stop for the light. On my right hand side, with no blinker, a car slowly drifts across the lane in front of me to fill the buffer, barely, and of course, has to immediately apply their brakes which makes me slam on my brakes, and everyone behind me who otherwise would have come to a nice, slow, controlled stop.

I’m over it. If you don’t have the common decency to use a turn signal, you’re an asshole, or stupid. I can’t come up with any other answers. I have always said that in most accidents, it takes two people to screw up at the same time, and I know for certain that everyone who doesn’t use a turn signal is only still alive because of the driving genius of people who do and who anticipate this kind of stupid shit.

And what makes the failure to use a turn signal so insidiously and offensively worse is the simplicity of it. It’s right there, a measurement in millimeters from your hand. It takes 1 calorie to turn it on, and for God’s sake, the damn thing turns off automatically saving you an additional calorie.

I have often thought of an invention where a car, sensing that it is turning, and it does not have a signal light on, should light up a bulb next to the signal bulb of a middle finger for all the other drivers to see. Because really, when you don’t use your signal, that’s what your saying to everyone, you are changing lanes or making turns with two big middle fingers held up high and loud for all the world to see and that is how everyone around you interprets it.

I would venture that a preponderance of accidents occur when the planets align, and Asshole Driver #1 is at the same place at the same time as Dumb Shit Driver #2 and they both execute Stupid Idea #74B at the same time which is quickly followed by smoke, sirens, the jaws of life, pissed off commuters, a hospital ride, CPR, funeral arrangements, a shovel of dirt and flowers next to a headstone on their birthday the following year.

And why? Because turning on their turn signal was just too damn complicated.

Like Loading...
‹ Battle of Bunkerville – Cliven Bundy – American Revolution 2.0 – In Pictures
‘Animal Farm’, a classic novel about Socialists changing the meanings of things, is really about Capitalism…so say the Socialists. ›