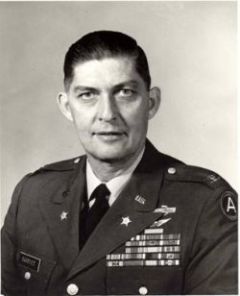 A 90 year old WWII, Korean War and Vietnam war vet who earned The Medal of Honor is not allowed to put a flag pole on his lawn and fly the American flag.  Amazing.  I wrote a letter to the HOA condeming their actions and an email to the law firm representing them.  Feel free to do the same…

In regards to your actions against Col. Van T. Barfoot, I must ask, where is your common sense, sir?  Have you lost your mind? This country is going to hell from the lack of common sense in people like you.

The heads of HOA’s like yours act like little third-world despots doling out your orders in your own private little governments.  I am a 36 year old accountant living in California and whenever I hear about little tin gods like you bossing people around and never applying basic common sense, I am utterly amazed and appalled.

This man is 90 years old.  He fought in the Korean War, Vietnam and WWII.  The man won The Medal of Honor for laying his life on the line in defense of a country that allows little people like you to pretend you’re big people.

Have some respect.  The day when you rout out three enemy machine gun nests, get in front of three enemy tanks and fire a Bazooka to disable one of them, take 17 prisoners, destroy a German fieldpiece with a demolition charge and carry wounded soldiers to safety…all in one day…you can fly a flag anywhere you want too.

Give the man the respect he deserves.  It’s just a flag pole flying an American flag, you need to relax and reevaluate what’s important in your life.

And remember, you’re just an average guy named Glenn.  That’s all you are.

An average guy named…
And an American Patriot

An excerpt from his Medal of Honor citation…

“For conspicuous gallantry and intrepidity at the risk of life above and beyond the call of duty on 23 May 1944, near Carano, Italy. With his platoon heavily engaged during an assault against forces well entrenched on commanding ground, 2d Lt. Barfoot (then Tech. Sgt.) moved off alone upon the enemy left flank. He crawled to the proximity of 1 machinegun nest and made a direct hit on it with a hand grenade, killing 2 and wounding 3 Germans. He continued along the German defense line to another machinegun emplacement, and with his tommygun killed 2 and captured 3 soldiers. Members of another enemy machinegun crew then abandoned their position and gave themselves up to Sgt. Barfoot. Leaving the prisoners for his support squad to pick up, he proceeded to mop up positions in the immediate area, capturing more prisoners and bringing his total count to 17. Later that day, after he had reorganized his men and consolidated the newly captured ground, the enemy launched a fierce armored counterattack directly at his platoon positions. Securing a bazooka, Sgt. Barfoot took up an exposed position directly in front of 3 advancing Mark VI tanks. From a distance of 75 yards his first shot destroyed the track of the leading tank, effectively disabling it, while the other 2 changed direction toward the flank. As the crew of the disabled tank dismounted, Sgt. Barfoot killed 3 of them with his tommygun. He continued onward into enemy terrain and destroyed a recently abandoned German fieldpiece with a demolition charge placed in the breech. While returning to his platoon position, Sgt. Barfoot, though greatly fatigued by his Herculean efforts, assisted 2 of his seriously wounded men 1,700 yards to a position of safety. Sgt. Barfoot’s extraordinary heroism, demonstration of magnificent valor, and aggressive determination in the face of pointblank fire are a perpetual inspiration to his fellow soldiers.”