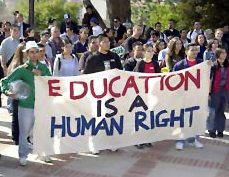 Every human only has one right…the right to one’s life. That’s it.

“Any alleged ‘right’ of one man, which necessitates the violation of the rights of another, is not and cannot be a right.” ~ Ayn Rand

In the discussion of what is a fundamental right, there is only simplicity and there are only two positions we can take on any individuals “rights” to anything…

Oliver Wendell Holmes, who served as an associate Justice on the United States Supreme Court provided this clear-cut analogy of the first statement, “”The right to swing my fist ends where the other man’s nose begins.”

I think that’s fair. So two schools of thought, simply laid out. So which school of thought are you?

On Thursday May 20th, around 200 protesters ascribing to “school of thought #2,” blocked Wilshire Blvd to support the Dream Act, which “specifies that illegal aliens can be granted amnesty if they go to college and earn a degree.” As you can see from the picture, they believe education is a human right.

Neither is a house, health care, a car, cable TV, a computer, or even food. These are not “rights” because in order for anyone to get them without earning them they must impose on someone else’s rights by taking from them what they have earned.

As a civilized society we believe in charity and benevolence and as such we choose, of our own free will, to give many of these things to others in need. It is our right to voluntarily surrender some of what we produce to anyone who wants it. It is nobody’s right to require that we do so.

Homes, health care, education, etc… the list of what people believe is their “right” to have is endless. If you’re not careful, you’ll soon find yourself working harder and harder to provide the means to support everyone else who claims to have a fundamental right to something. I’ve decided to coin this concept as, “Resolving the Cosmos” after Thomas Sowell’s summary of this phenomenon.

To paraphrase Mr. Sowell, it is very simple for all of us to play by the same rules when the rule for all is the right to succeed or fail based on our own initiative and ambitions, but “if  you are going to rectify the shortcomings, errors and failures of the entire cosmos” then “somebody has got to have an awful lot of power to impose what they think is right on an awful lot of other people” (emphasis added). In other words, many people will get punched in the nose.

All of these “rights” cost real money, that real people must perform real work for, and then turn those real earnings over to those claiming a fictional “right” to it. So when anyone says that “such-and-such” is a right, what they are really saying is that it’s your obligation  to give it to them, and their right to take it from you.

Do we want our children growing up thinking that everyone else owes them something and that others can impose their “rights” upon them at will, or rather that they have complete freedom, free from obligations imposed on them by others, to be whatever they want and do whatever they want? That they can succeed or fail as free human beings with the right to live freely?

The Los Angeles Police Department has arrested at least nine demonstrators who blocked Wilshire Boulevard Thursday as part of a immigrant rights march.

The protest jammed traffic in Westwood and surrounding communities, with both Wilshire Boulevard and the 405 Freeway affected. Metro announced that some bus routes were being detoured. California Highway Patrol Lt. Steve Strull said officials want to clear traffic so ambulances headed to Reagan-UCLA Medical Center are not delayed.

Nancy Meza, 23, a UCLA student who is scheduled to graduate in three weeks with a degree in Chicano studies, said the civil disobedience was organized in an effort to push for passage of the Development, Relief and Education for Alien Minors Act, commonly known as the DREAM Act.

The DREAM Act is federal legislation that would provide certain undocumented alien students who graduate from U.S. high schools and have been in the country continuously for at least five years before the bill’s enactment the opportunity to earn conditional permanent residency.

The students would obtain temporary residency for a six-year period. Meza, who said she arrived in the U.S. from Mexico when she was 2 years old and is undocumented, said it was the legislation was needed to ensure that students like herself would eventually be able to work.

“I’m graduating in three weeks, but I can’t even work,” Meza said. “We are urging Sen. Dianne Feinstein [D-Calif.] to push for passage of the DREAM Act this year.”

Officer Krystal Carter, a spokeswoman for the CHP, said the students had been arrested for “failing to disperse…and not complying with police orders.” Carter could not confirm the number of students arrested.