And every single one of those people, from serial killers to cannibals is an American!

And for all of you reading this, being Americans as well, you too must hate Muslims, Christians, Catholics, whites, blacks, gays, support the sale of illegal guns and drugs, and if given a choice would murder people and eat them.

This man wearing a taqiyah does not represent all muslims any more so than he represents all men.

Let me prove it to you.

Nobody can deny that there are Jewish-Americans that in supporting Israel are also supportive of the elimination of Muslims who resist the existence of the Jewish State.

There are Caucasian-Americans who would prefer the elimination of blacks including white supremest groups that would just as soon eradicate them.

There are Catholic-Americans who would prefer a world without gay men and women, even if that meant genocide.

There are Muslim-Americans that would prefer to see the United States collapse, and that all non-Muslim infidels be put to death for crimes against Allah. 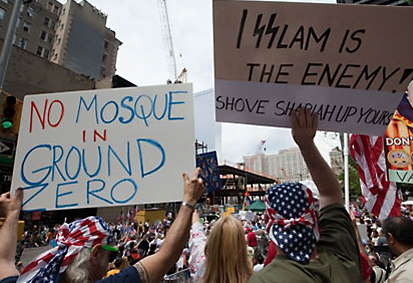 These men and women wearing American flags do not represent all Americans any more than they represent all Tea Partiers or all men or all women.

There are Christian-Americans that would prefer to see the Muslim world collapse, and that all non-Christians be put to death for crimes against God.

There are American citizens who are members of the mafia and organized motorcycle gangs that have little respect for laws or life if they get in the way of illegal profits such as through the sale of guns and drugs.

There are criminally insane American citizens like Jeffrey Dahmer and Charles Manson who murder people indiscriminately and in the case of Dahmer, eat them.

Every single one of these people call themselves American. They live among us, have American passports and when asked what nationality they are when traveling abroad, they say, “American.”

Do you believe that each of these people, in calling themselves American means that you too, in calling yourself an American, must agree with and support their views and actions? 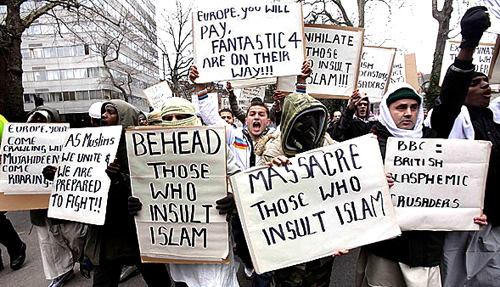 Do these Muslims represent all Muslims everywhere?

Or would you point out to them that just because some people who call themselves Americans and also happen to have these views, does not mean they represent the views of the majority of Americans?

And would you say to that person that even though most Americans do not support those views, we do live in a free country and they are allowed to have those views despite how much most other Americans disagree with them?

In fact, most individuals of the “something-American” groups I mentioned earlier would point out that the views of the few among them do not represent the feelings of their entire group, whether that group is Jewish-American, blacks, whites or any other group. No single member, or group of members, can represent the entire group. They can only represent themselves. 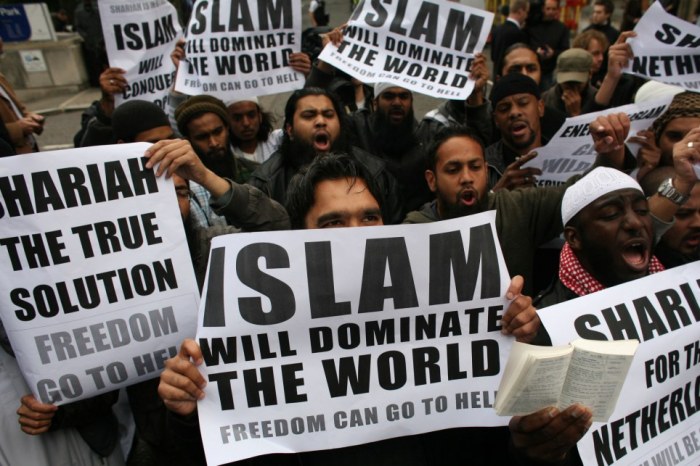 Or these? I don't think so.

So keep that in mind when a group that represents the Tea Party participates in gay bashing, Muslim hatred, black racism or any of the thousands of other social positions they could take or actions at rallies they could perform.

The Tea Party, officially, has only three objectives; a constitutionally limited government, fiscal conservatism, and a return to free-market economics. Nowhere does it talk about gays, blacks, Muslims or anything else. But that does not stop racist groups or others from calling themselves part of the Tea Party anymore than it stops them from calling themselves Americans.

There are groups that call themselves part of the Tea Party that believe in the same three objectives as the Tea Party, but also have views that diverge drastically from the views shared by the majority of Tea Party members. Similarly, there are militant Muslims that desire the destruction of every American citizen but read the same Koran as the millions of Muslims in the majority that do not desire that destruction. We can not lump together all Muslims into the militant category simply because both peaceful and militant Muslims read the same book.

You may not be part of the Tea Party, but you are an American and these hate groups don’t represent most Americans like you, anymore than they represent most Tea Party members.

This woman is holding an American flag. Does that mean her sign represents all Americans, like you? If she were holding a Tea Party flag instead, she wouldn't represent all Tea Partiers any more than she is currently representing all Americans.

Like Loading...
‹ $61B – Less than 4% of what we owe and the Politicians can’t even agree to cut that much.
How Public Unions enslave people…even non-members ›