Home › Headlines › What do Unicorns, Leprechauns and Falling Unemployment have in common? Only Obama believes they exist.

What do Unicorns, Leprechauns and Falling Unemployment have in common? Only Obama believes they exist. 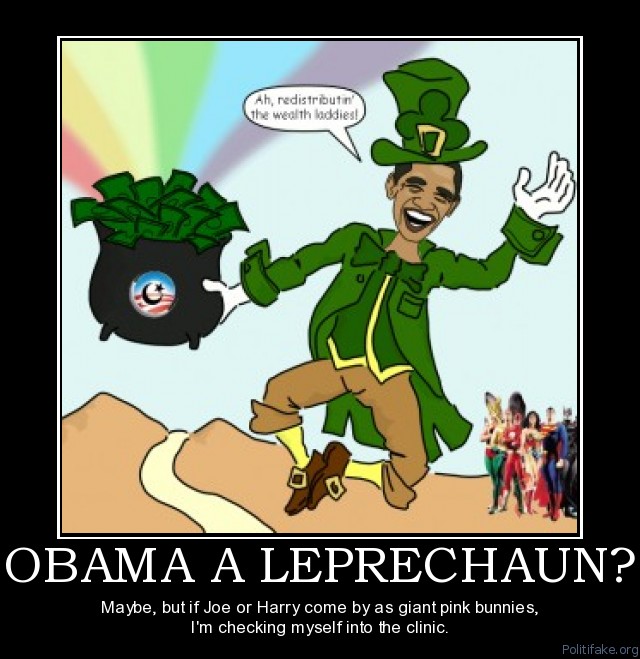 Did you catch that? There are less people working now, than before. LESS! And yet, the unemployment number fell…how is that possible? I will explain.

So as reported by CNBC this morning, something really bad happened in the number of people who have given up hope and have stopped looking for work.  Their numbers showed “a really big spike” upward, “from 982,000 to 1.119 million, a difference of 137,000 or a 14 percent increase. These folks are generally not included in the government’s various job measures. ” (emphasis added)

And there’s more bad news, “The average duration of unemployment rose for the third straight month and is now at a record 40.4 weeks—about 10 months and now double where it was when President Obama took office in January 2009. The total number unemployed for more than half a year now stands at 6.18 million, 130 percent higher than when the president’s term began.”

And what is Obama’s answer to this? Tax breaks to hire Vets. Come ON. Seriously? Oh, and he wants to borrow some more money from the Chinese and throw it at the unemployed by extending the unemployment insurance coverage. How does going into more debt and handing it to someone create a job?

This guy is a complete waste. He knows nothing about economics, job creation, the Constitution…he just needs to leave.

Unemployment rose, not fell last month but…our  government will never tell you the truth, you’ll need a Unicorn or Leprechaun for that.

Like Loading...
‹ Economic Update – Government spends $13T to save $2T while food at your grocery store is getting smaller & recession moves back in like a bad roomate who wants to borrow your deodorant…
Microsoft, Exxon Mobil & ADP now have a better credit rating, and Apple has more cash and securities, than the United States of America. ›