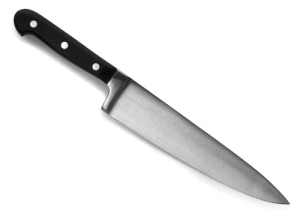 Police say the suspect purchased a knife inside the store and then turned it into a weapon. Smith’s employee Dorothy Espinoza says, “He pulled it out and stood outside the Smiths in the foyer. And just started stabbing people and yelling you killed my people. You killed my people.”

Then, before the suspect could find another victim – a citizen with a gun stopped the madness. “A guy pulled a gun on him and told him to drop his weapon or he would shoot him. So, he dropped his weapon and the people from Smith’s grabbed him.”

By the time officers arrived the suspect had been subdued by employees and shoppers. Police had high praise for the gun carrying man who ended the hysteria. Lt. Brian Purvis said, “This was a volatile situation that could have gotten worse. We can only assume from what we saw it could have gotten worse. He was definitely in the right place at the right time.” (Consider this statement with Newtown…if only a teacher had had a gun, we might be hearing the same thing).

Dozens of other shoppers, who too could have become victims, are also thankful for the gun carrying man. And many, like Danylle Julian, are still in shock from the experience. “Scary actually. Really scary. Five minutes before I walk out to my car. It could have been me.”

Police say right now they have no idea what caused the suspect to go on the dangerous rampage. (We will update as soon as we learn new information.)

So far, police have not released the names of the suspect, the victims or the man who pulled the gun.