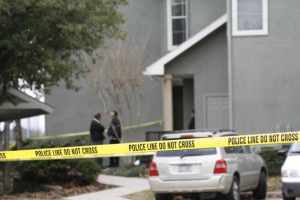 Two gunmen kicked in the door of an apartment on a college campus in College Park, Georgia. Eleven students were attending a birthday party inside, half of them girls. The gunmen seperated them by putting the girls in a room with one of the gunmen who then forced them to strip naked and then raped all of them. Before leaving, the gunmen made the kids hand over all of their cellphones and wallets and then shot all eleven students to leave no witnesses.

Memorials have been established for the victims and grief counselors are on site for the students and teachers. The two gunmen escaped and are at large in the area. They are both armed and dangerous. The town of College Park is on high alert and schools in the area have been closed. All campuses are on lock down with heightened security. The FBI is already on scene and local police from surrounding communities are helping in the search and providing additional security for the town’s frightened citizens.

For the anti-gun crowd, this is just another example of why guns need to be banned. The brutal rape and slaughtering of eleven students, the grief counselors working with striken loved ones and friends, a town sent into panic as two brutal gunmen are on the loose. Schools closed. Citizens outraged and grief stricken. Grade school portrait photos of all eleven smiling kids being shown on CNN all day and night with reporters standing in front of police tape interviewing crying and distraught students in nearby apartments sobbing, “It could have been us…we were right next door…this is so frightening.”

Unfortunately for the anti-gun crowd, the real story is that one of these brave eleven students pulled a handgun out of his backpack and shot the gunman who was watching the boys, then proceeded to kick in the door of the girls room right before the second gunman was about to rape them and shot him too. The girls were never raped. None of the students were killed. There were no grief stricken students. There was no 24/7 CNN coverage of this “massacre” looping the video every 15 minutes of crying parents, sobbing students, candlelight vigils, flower strewn and note covered memorials, and baby photos of the raped and slaughtered. The anti-gun crowd including our Liberal Politicians were not on every news channel smashing their fists into the table demanding more gun control laws and gun bans while exploiting the crisis to expedite anti-gun legislation that would not have prevented this “massacre” anyway. And why?

Because someone had a gun and it saved lives. And that’s why you never heard about it.

“Apparently, his intent was to rape and murder us all,” said student Charles Bailey. Bailey said the gunmen started counting bullets. “The other guy asked how many (bullets) he had. He said he had enough,” said Bailey.

And the final irony…the gunman (Lavant) who was shot before raping the girls jumped out of a window to run away and while lying on the ground unable to escape, begged for help, just like the girls he was going to rape would have done.

“And I heard someone say, ‘Someone help me. Call the police. Somebody call the police,'” said a neighbor. The neighbor said she believes it was Lavant, who was found dead near his apartment, only one building away.

Like Loading...
‹ Man Buys Knife in Store – Starts Stabbing Customers – Gun Saves the Day – “Could Have Gotten Worse!”
Women & Girls not raped, murdered or beaten – Why? They had a gun. MSNBC yawns, too boring to report on. American ignorance uninterrupted. ›