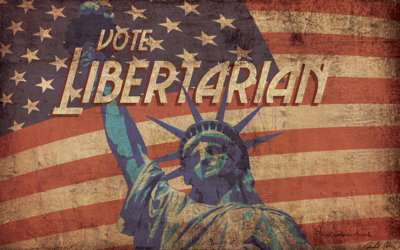 The following is my Libertarian election guide for 2016. I took a first pass at my ballot and marked what I believed to be most consistent with Libertarian principles. Of the 25 choices, I was able to complete 15 as “givens” based on the raw basics of Libertarianism such as; no increased taxes (yes, clutch your pearls, not even on the “wealthy”), no additional power or wealth to government, yes on anything that gave The People more freedom to make good or bad decisions of their own free will, etc… 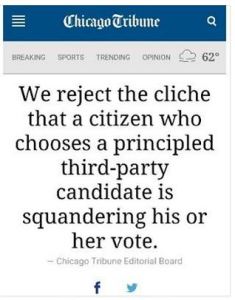 After my first pass, I found that the official Libertarian website agreed with me on every single one of my 15 choices. The remaining items I chose to leave so I could collect more information about the choice before deciding.

The most surprising was found on Prop 64, the legalization of marijuana. Libertarians firmly believe that the State does not own your body, nor has any right to control your 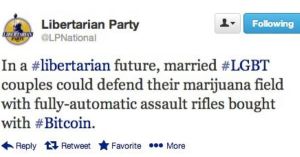 body in any way. While most politicians on both the Left and Right would disagree and say the State does have the right to control your behavior (thus controlling your body) based on a variety of insipid calls to emotion driven by whatever the hoi polloi decide for you that you should or should not be doing with your body. Libertarians are firmly opposed to this based upon the ethical foundation of the non-aggression principle.

Libertarians are the only party that believes that only you own you, and nobody else.

That said, Prop 64 should be a yes – typically, but not this time. Prop 64 will pass because

people vote on headlines and are too lazy to read the fine print, and that is unfortunate. Prop 64 creates a briar patch of additional government taxes, regulations, agencies, government employees (with meaty government employee pay and health and retirement benefits) and controls that supersede the value of legalizing marijuana. It reminds me of the classic Tocqueville quote:

“Society will develop a new kind of servitude which covers the surface of society with a network of complicated rules, through which the most original minds and the most energetic characters cannot penetrate. It does not tyrannize but it compresses, enervates, extinguishes, and stupefies a people, till each nation is reduced to nothing better than a flock of timid and industrious animals, of which the government is the shepherd.”

Prop 64 is your classic example of Government giving you something you want, in return for Government getting a whole lot of what Government wants. It takes patience, deferred gratification, and a certain level of intelligence to avoid gaining a cow only to lose the farm. And that is what Prop 64 does.

Why would Libertarians vote ‘no’ on Prop 64? Massive growth in Government power and wealth, that’s why. Legalizing pot is that simple. Legalize it. The Libertarian law is one sentence long. Eggs, milk and cheese are “legal” right? How long are the laws making those legal? Pot should be no different. It’s just a thing. Like any other thing. Like so many things.

AWC Note: As a comment below wisely reminded me, we need to define “legal” as it relates to freedom. View my response below for more information on that.

But no socialist Government, especially one as socialist as California, is going to miss out on the opportunity to tax and regulate the hell out of some “thing” in such demand, previously illegal, in order to increase its own wealth and power and control, and that is what we have with Prop 64.

We can afford to wait for something more “freedom” oriented to be put on the ballot in some future year.

As of January 1, 2017 it is legal within the borders of the State of California to grow, transport, sell and consume marijuana.

And of course, the rules of private property, also foundational to Libertarianism, would permit businesses and individual property owners to allow, or not allow, pot smoking. Just like how smoking is not allowed in many places.

As well, local governments can, at the request of their citizens, make the growing, transporting, selling or consuming of marijuana illegal within their own limited jurisdiction. This is based on the Founding Fathers “Great Experiment” where thousands of smaller governments would approach different social problems differently, with some ideas gaining in popularity and others losing, with the associated positive and negative consequences. Business and labor will move to the areas most people agree with, and leave areas most people don’t agree with. This natural ebb and flow of labor and resources permits a natural solution without imposing massive Federal level blankets of laws that many people support, while many people are oppressed, and can go nowhere to escape that oppression (outside of leaving the country).

So with that one simple one sentence law, Libertarians would free every individual in the entire State to decide for themselves what to do about marijuana. Libertarians, in short, are pro-choice on everything! YOUR choice.

ACW Note: As a nod to the comment below on FREEDOM the Libertarian “law” for marijuana would actually look like this: a repeal of all laws that have anything to do with marijuana (and should be with any “controlled” substance, actually). That’s it. There is no law on the book that you can eat cheese because laws are meant to take away freedom, not grant it. You already have freedom to eat cheese (and smoke pot), you were born with it, Governments only exist to take it away, and they use laws to do that. In this case, since the law is Federal, then it takes a State law to be the anti-matter that cancels the Federal law within the boundaries of the State, so in this case, we do need an un-law to undo a law. In reality, there should be no LAW at all in any way about marijuana at any level.