Home › Government Failures › Ariana Grande, “I am not a piece of meat.” But yes, you are – and you’ve made a lot of money from it.

Ariana Grande, “I am not a piece of meat.” But yes, you are – and you’ve made a lot of money from it.

In  a recent article, Ariana Grande complained about being objectified. The audacity of her complaint left me mystified. I don’t know whether this is a case of youthful ignorance or an IQ that is simply insufficient to grasp the objective realities of the world.

Is that a rump roast?

A fan of Ariana’s rapper boyfriend was lavishing praise upon him, until he said something that displeased her…

“I thought this was all cute and exciting until he said ‘Ariana is sexy as hell  man, I see you, I see you hitting that!’.

“Hitting that? What the f—?

“This many not seem like a big deal to some of you but I feel sick and objectified. I was also sitting right there when he said it. I’ve felt really quiet and hurt since that moment.

“Things like [this] happen all the time and are the kinds of moments that contribute to a woman’s sense of fear and inadequacy.

What she felt was the cold, hard, steel, pitiless smack of objective reality. Imagine, for a moment, the years that must have passed by for her with this narcissistic fog of grandeur that she wallowed through, lavished with praise by her fans and promoters and managers and handlers to be suddenly, and violently, blown out into the sharp crystalline focus of reality.That men look at her sexually. Physically. Primally. Oh, the horror. 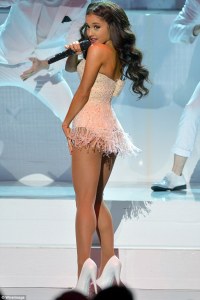 “I am not a piece of meat that a man gets to utilize for his pleasure. I am an adult human being in a relationship with a man who treats me with love and respect”.

But yes, honey, you are a piece of meat. When you dress in objectifying clothing, attempting to use to your advantage the assets that you were genetically gifted with, then a slab of steak you will become.

Do you know who doesn’t dress like you do Ariana? Fat girls.

They know there is no intrinsic benefit to them, no chance to manipulate the opposite sex, no edge that can be gained by dressing provocatively – so they don’t. They rely on other skill sets, or develop new ways to engage

the opposite sex. But women like you, Ariana, who are aware of what can be gained by taking advantage of revealing as much of your body as is legal in America, and illegal in several countries, and are reaping the benefits of dragging your porterhouse across the stage and in front of the photographers lens.

Don’t be coy, or ignorant, that you aren’t aware that men are attracted to beautiful women. They are, you know this, and by the way you’ve dressed you are turning that attraction into cash. The sheer audacity for you to then complain to all of society about men, and how dare they objectify the objects you fail to clothe as you pull money from that cash register is an amazing feat of ignorance or impetuousness.

“I feel like speaking out about this one experience tonight because I know very well most women know the sensation of being spoken about in an uncomfortable way or taken advantage of publicly by a man.

“We need to talk about these moments openly because they are harmful and they live inside of us as shame.

“We need to share and be vocal when something makes us feel uncomfortable because if we don’t, it will just continue. 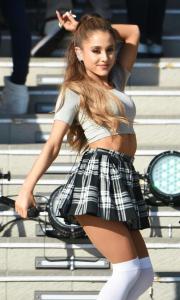 His comment lives inside of you as shame, because you know, deep down, that you are using the very same sexualized objectifying that you claim to hate so much as a means to build wealth, fame and attention. The fact that you are attempting to externalize your shame, and project it upon society at large, is a sham, and hypocritical. You are a hypocrite Ariana, and you know it.

“We are not objects or prizes — we are QUEENS”.

Thank you Ariana, I could not have closed out with a more perfect example of our narcissistic, self-righteous, irresponsible and victimless society.

Tags: Ariana Grande, ariana sexually objectified, I am not a piece of meat, objectifying women