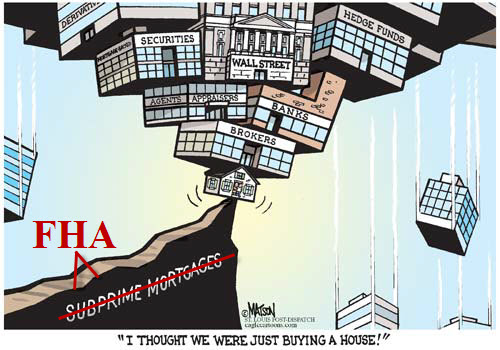 As I’ve mentioned countless times, FHA loans are the new subprime, and we all remember how subprime ended…

Well, before subprime ended, a whole lot of something else was going on…does any of this sound familiar?

According to HousingWire, “Lend America, with Ashley at the helm, had grown to become one of the most widely recognized originators of FHA-backed mortgages, using television commercials and a sponsorship agreement with his motor sports race team. But HUD and the Department of Justice (DOJ) would later allege Ashley fostered an environment that encouraged Lend America sales staff to originate FHA loans, even when borrowers were not eligible. In his meetings with sales staff, the suit claims, Ashley told them there were “no minimum credit score requirements” for FHA loans and that it was okay if a borrower made late payments on previous mortgages.”

“His career would later take him into leadership roles at Lend America, where, according to the lawsuit, under Ashley’s leadership Sales staff could make 10 times the commission on FHA loans than on standard mortgages and almost four times the commission than a subprime mortgage. The suit claims Ashley set a sales goal of one loan origination per week and told loan officers ‘loans should not be closed in two weeks or a month, but in eight hours.'”

“In addition the suit claimed, Ashley told sales staff those who did not originate large numbers of FHA-insured mortgages would be terminated from employment at Lend America and that he would fire the lower producing members of his sales staff.”

Wow, deja vu. Lenders aggressively qualifying anything that breathes into a subprime FHA loan so they can make money on commission.

This is why government should never be involved in trying to manage a market. Moral Hazard, Unintended Consequences, Regime Uncertainty, they wreak havoc on the economy and its citizens, all because of government intervention. When did it ever make sense to let politicians, really just a bunch of lawyers, run an economy? Why are we surprised when they make all these changes that never work and just make things worse?

Like Loading...
‹ Congrats! You Are A Co-Signer On Your Neighbors House
Pelosi Says, “Don’t read the healthcare bill, just pass it.” ›