Housing Market Double-Dip Roller Coaster, Hang On To Your Hats! 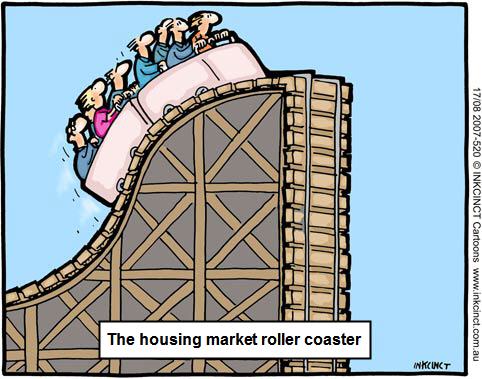 The fact that the housing market recorded its largest ever home sales decline in history last month proves yet again that government stimulus does not work, and in fact makes things worse, while articles such as the one today continue to provide the propoganda the government perpetuates to make you think that moving buckets of water from one side of a lake to the other makes for bigger lakes.

What?! But the homebuyer tax credit is part of the “Obama administration’s stimulus-driven economic recovery” not some “other thing“ that is suddenly undermining it. It was Obama’s idea to “stimulate” the housing market with $8,000 tax credits hoping that would stimulate the economy. When that doesn’t work, Businessweek blames that very same Obama “housing stimulus” for undercutting Obama’s “economic stimulus?” Huh?

How stupid do they think we are?

The government tried to stimulate the housing market by taking $8,000 in tax money from you, and giving it to someone who wanted to buy a house through the $8,000 home buyer tax credit. This is like taking a bucket of water from one side of a lake, walking around to the other side of the lake, and pouring it back into the same lake.

Does this activity “stimulate” the level of the lake to rise?

Banks, those institutions that have been providing mortgage loans ever since there were houses, will not loan to anyone, primarily because home prices are still too high. The banks want to loan the money, but almost nobody has the 20% down they would need based on these absurdly overpriced homes.

In comes our government to save the day, and destroy tomorrow and next week in the process…

With banks unwilling to loan, and for good reason, our Government (with your tax dollars) now underwrites 90% of every new mortgage in the United States. The removal of the government tax credit in April caused the largest decline in home sales in history. What more evidence does anyone need to realize that the government can only get in the way of an economic recovery?

If home prices had been allowed to fall to market clearing levels, if banks had been forced to value mortgages they held at their market value and if the banks that would have failed in that process been allowed to fail, then we would already be at, or very near the bottom of the correction and the economy would be healing itself; not by moving around buckets of water but by adding water to the economy through new jobs and business growth.

But none of what needed to happen was allowed to happen because our politicians, our government, intervened in the free market and used hundreds of billions of our tax dollars to delay the inevitable correction. But even our government, as grand as they think they are, can not stop the economy from healing itself, the government can only make it take ten times longer and cost billions more than it should.

And they are doing their damnedest to make sure it does.