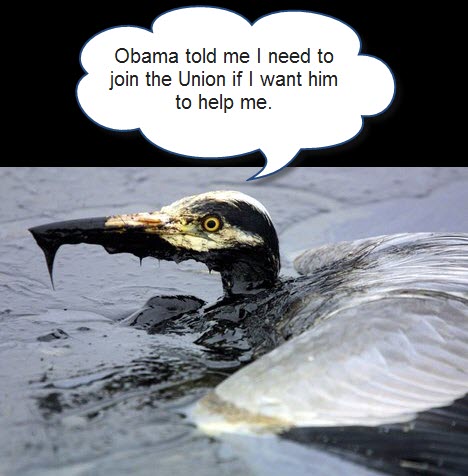 Never one to let an opportunity to help labor unions go to waste, Obama is not allowing non-union skimmer ships that could assist in cleaning up the BP oil spill to join the cleanup effort.

As a result, many oil skimmers that could be out collecting oil off the coast of Louisiana have been barred from doing so. Obama is more interested in keeping the labor unions happy than he is with the environmental damage of the BP oil spill. In order to protect his labor union friends and voters, Obama is hiding behind The Merchant Marine Act of 1920.

The Merchant Marine Act, also known as the Jones Act, is a United States statute created in 1920 and, “is a vestige of the post-World War I years, when the vulnerability of U.S. shipping to German U-boats was still fresh in the public’s mind. To maintain a “dependable” merchant fleet for the next “national emergency,” Congress restricted coastal shipping between U.S. ports to U.S.-built vessels owned by U.S. citizens; related laws require U.S. crews. The Jones Act may or may not have achieved its original purpose, but shipping businesses and labor unions love the way it shields them from foreign competition.” ~The Washington Post

The Jones Act was waived in New York City to allow aid following 9/11, and was waived again by the Bush administration in the days following Katrina. It is currently waived for work on wind turbines off the coast of Delaware. Obviously, Obama could have immediately waived the Jones Act to allow foreign aid to assist in the BP cleanup, but since that would hurt Obama’s friends in organized labor, the environment will unfortunately have to suffer.

Like Loading...
‹ Foreclosed Homeowners In California Get $100,000 To Pay Their Mortgage
Steve Wynn, “Macau and China is stable, Washington is not” as investments (and the jobs that go with it) leave the United States ›