To bring you up to speed, Lisa Murkowski inherited her Senate seat in Alaska from her Dad in 2002. FT.com reports, “Frank Murkowski, Ms Murkowski’s father, bequeathed her his Senate seat in 2002 after he was appointed state governor, a move widely regarded as nepotistic”…so she was never elected by the people. 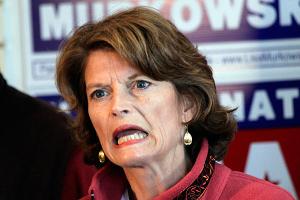 Mukowski ran in the primary on the Republican ticket. She was beaten by Joe Miller, also a Republican. Joe was backed by the Tea Party because Lisa Murkowski is a RINO. Since Joe won, Lisa’s been throwing a hissy fit tantrum, 2 year old style. She is still actively campaigning to be the write-in candidate to overthrow Joe. Remember, these guys are both on the same team, so this is absurd.

So yesterday as reported by the Tea Party Express, “Murkowski was able to get her friend, who is the head of the Elections Division in Alaska to violate the law and print out a list of write-in candidate’s names, so that voters would be given a sheet listing Lisa Murkowski’s name – in order to maximize the votes for Murkowski. But it doesn’t end there.  The Elections Chief, Murkowski’s friend, has also announced that voters need not spell Murkowski’s name correctly and they’d still count the votes for Murkowski – again breaking with not only tradition but the law.

Murkowski’s lawyers forced radio talk show host Dan Fagan off the airwaves because he was advocating for Joe Miller.  Murkowski’s legal team, backed by millions of dollars in special interest and labor union money, threatened the radio station they would be sued out of existence if they didn’t boot Fagan until after the primary – so as to silence his pro-Miller segments on his radio show.

But that’s just the tip of the iceberg.  Reporters at the Anchorage CBS TV affiliate were caught red-handed conspiring about how to ambush Joe Miller and come up with an unflattering story, concoting smears against Miller and then saying someone at the Joe Miller rally would surely have to fit the mold.  They even suggested the smear of alleging the Miller supporters were child molesters.”

The call failed to disconnect properly. It was later authenticated by a text message “Damn iPhone… I left you a long message. I thought I hung up. Sorry.”

Like Loading...
‹ California Election Ballot – How to Vote on All Those Judges and The 411 Dangers on Judicial Activism
Time To Stop Ignoring the 17th Amendment ›