Home › Headlines › What made America great and can make it great again? According to Republican Rick Perry, magic and mysticism can, not reason and common sense.

What made America great and can make it great again? According to Republican Rick Perry, magic and mysticism can, not reason and common sense. 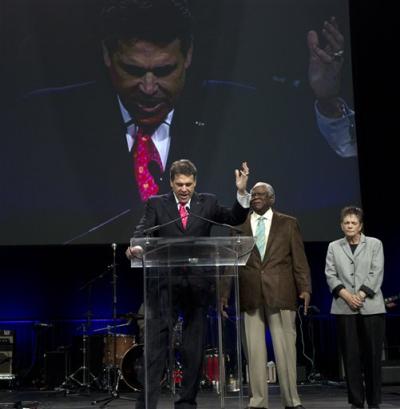 Believe in capitalism, 'cause God says so.

Texas Governor Rick Perry is spending a considerable amount of time basing his run-up to entering the Presidential race on his religion, prayer and God. Unfortunately, this tactic is going to turn myself, and many younger Americans away from, and even against him.

There has always been something troublesome to me about politicians espousing God in politics. I am fully aware of the religious faith of the Founding Fathers and the majority of Americans at the time of the Revolution, but the Declaration of Independence and the Constitution were not written based on the teachings of God or of any religion for that matter. We need look no further than the First Amendment of the Constitution that states, “…Congress shall make no law respecting an establishment of religion, or prohibiting the free exercise thereof…”

Nobody needs God, or any religion, to know that they should be free…to know they should do no harm. Like hunger, thirst and curiosity, freedom is something we are born with.

So why is a Politician like Rick Perry starting to act and look and feel a lot like a religious televangelist?

I believe he is making a broad-based appeal to the far religious right which for some reason, the Republicans continue to think make up most of this country, and most of their base. I completely disagree with this assumption. I believe that most Americans that believe in God or any religion are moderate on most social issues and that most Americans that do not believe in a God, or simply believe in something like “spirituality” are most definitely moderate on social issues.

I think this has a lot to do with the children of most Americans not being rigorously exposed to, or not buying into most religions, at least not completely, so the children have relaxed opinions or even support issues like homosexuality, stem cell research, etc…(even if they still believe in God simultaneously). I believe this does impact how the parents think about these issues over time and moves them to more moderate positions as well.

I think that the religious far right is actually a much smaller group than the Republicans and Rick Perry realize, and that most of it consists of individuals that are in their retirement age which means this groups will get smaller every day.

Ayn Rand specifically calls out the stupidity of appealing to religion by the Republicans in her book, “Capitalism: The Unknown Ideal” where she states:

“Sensing their need of a moral base, many ‘conservatives’ decided to choose religion as their moral justification; they claim that America and Capitalism are based on faith in God. Politically, such a claim contradicts the fundamental principles of the United States: in America, religion is a private matter which cannot and must not be brought into political issues.

Intellectually, to rest one’s case on faith means to concede that reason is on the side of one’s enemies – that one has no rational arguments to offer. The conservatives’ claim that their case rests on faith, means there are no rational arguments to support the American system, no rational justification for freedom, justice, property, individual rights, that these rest on a mystic revelation and can be accepted only on faith – that in reason and logic the enemy is right, but men must hold faith as superior to reason.”

Consider, when Khrushchev visited the United States he threatened to bury the United States at a televised luncheon because it had been scientifically proven that communism is the system of the future, destined to rule the world. The spokesman for the United States, Mr. Henry Cabot Lodge answered Khrushchev by stating that our system is based on faith in God.

“Prior to Khrushchev’s arrival, the ‘conservative’ leaders – including Senators and House members – were issuing indignant protests against his visit, but the only action they suggested to the American people, the only ‘practical’ form of protest, was: prayer and the holding of religious services for Khrushchev’s victims. To hear prayer offered as their only weapon by the representatives of the most powerful country on earth – a country allegedly dedicated to the fight for freedom – was enough to discredit America and capitalism in anyone’s eyes, at home and abroad.”

When I see or hear about Rick Perry and his televangelist approach to drumming up Americans’ support, I can only think of the words of Ayn Rand. There is a serious lack of education in this country regarding monetary and fiscal policy, the history of the expansion of government and that the Constitution is not, in fact, a “living, breathing document” as we were brainwashed in school to believe. On the contrary, the Constitution is quite specific and quite rigid in its purpose…to protect citizens of the United States from the inevitable and unrelenting encroachment of government into your lives and from abrogating your freedoms.

“Living, and breathing” is just another way to say, let’s change what it says so Government can do whatever it wants.

Leaning on religion, instead of appealing to Americans to use reason and logic to understand why Capitalism is the only moral system of government, that Big Government is wrong and dangerous, and that freedom is something you are born with and not something granted to you by a government; is simply a tactic of conceding reason to our enemies and then retreating into, “the realm of mysticism, of faith, of the supernatural, into another world, [and] surrendering this world to [theirs].”

Like Loading...
‹ Paul Krugman blames Tea Party for causing all our economic problems and joins John Kerry in blaming the media for covering the Tea Party and not censoring them instead.
“What is greed?” Milton Freidman answers the question. Obama would be confused. ›