January 8th Update – If you think this is bad, see what CBS just did on my new post by clicking here.

At the top of my list to be thankful for this holiday season is the Internet. CBS and most (if not all, and I am not excusing Fox News from this gaggle) major news agencies continue to pretend the elephant that is Ron Paul is decidedly not in the room, and MSNBC removed the “4” key from their correspondents keyboards so they can’t report how many millions the Obama & Friends Christmas Vacation is costing the taxpayer this year. 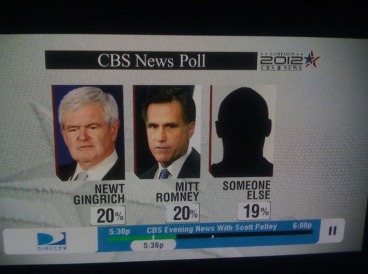 I know a lot of people, and when I say people I mean dullards, talk about all of the misinformation on the internet and the danger of taking any of the information there too seriously. Yeah, right…because the information coming from CBS, NBC, CNN and ABC is so much more honest, balanced and intellectually stimulating? Gimme a break. If God created the Internet, that might be enough to make me reconsider my atheistic heathenism and go to church tonight.

As far as I’m concerned, the Internet is the last but greatest line of resistance against the major media outlets that surrendered their informational independence long ago for the warm, safe security of corporatism where government and corporations merge into a tyrannical goo that gets stuck to the bottom of your shoe making it hard to walk and you just can’t scrape it all off no matter how hard you try to and always find yourself asking, “Where is that funky smell coming from?” 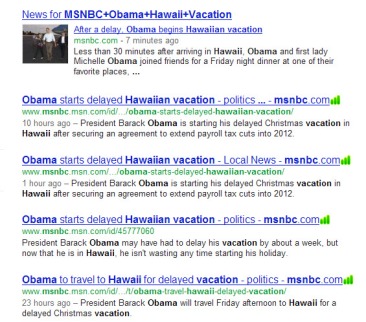 Gooey CBS is reporting that Mitt and Newt are tied for first place in their latest poll, with the third position held by “someone else” even though according to their own poll that “someone else” with the third highest polling numbers is actually Ron Paul. They even went so far as to use a black silhouette for the face of “he-who-shall-not-be-named” so the socialist CBS commentators would not have to vomit on themselves from being exposed to an image of Ron Paul.

Meanwhile, if you Google “MSNBC+Obama+Hawaii+Vacation,” the first five search returns are all reports from MSNBC discussing Obama’s vacation, and not a single one of them discusses the $4M price tag.

Media bias…it’s where that funky smell is coming from.

Like Loading...
‹ Obama Christmas Vacation Tops Out at $4 Million – Must Be Nice. How many Christmas toys for poor children could that have bought? Such is our life, with a King.
Ron Paul #1 in Iowa! Fourth time in a week! ›