The latest CBS Poll ignores Ron Paul in the #2 position in New Hampshire showing only the first, third, fourth and fifth positions. CBS even went so far as to say Santorum was giving Romney “a run” even though Santorum is way down at 6% and Ron Paul was way up at 14% (Ron has moved even higher since then – as of yesterday Mitt has slipped to 35% and Ron has moved up to 20% – Click here for Suffolk University Poll). 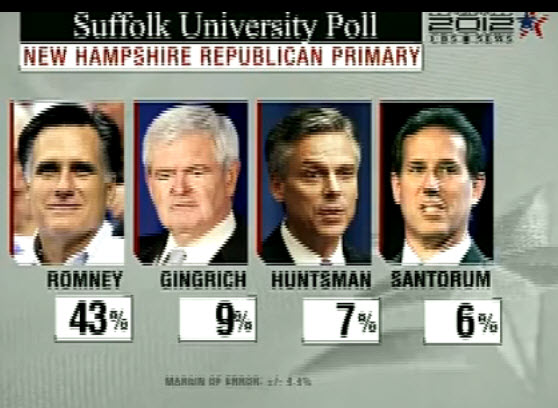 CBS continues to blatantly ignore Ron Paul. Citing a Suffolk University Poll, found here, CBS simply deletes Ron Paul from the reported results in his head-to-head competition with Romney for the top spot in the upcoming New Hampshire showdown. You can watch the video here.

How many more posts do you need from all over the internet showing you the in-your-face media bias? CBS doesn’t care what you think, they don’t care about you, about the United States, about your financial future or your family. CBS is doing what its Corporatist political puppet masters tell it to do.

The Media, the Corporate Elite and the Politicians are terrified of Ron Paul, of what his small government, incorruptible, Constitutional value system would do to the free flowing fraudulent money train that our Corporatist political system is feeding off of. They are so desperate to prevent his election, they don’t care how blatant and obvious their censorship is. They are desperate to keep Americans in the dark and that means lying straight to your face and hoping you will swallow it all down.

Like Loading...
‹ Rick Santorum – Just another architect of Big Government, with a Big Government voting record and a Big Government checking account – and why none except Ron Paul know how to pronounce the word “Constitution.”
Gold & Silver – My Love Affair ›