Kanawha Plaza has been Ground Zero for civil protests in Richmond, Virginia.

First, the Richmond Tea Party protested ever-increasing government, higher taxes, higher unemployment and growing government regulation. Next came Occupy Richmond which protested…well…whatever it is that the Occupiers protest. Both groups assembled in Kanawha Plaza, one group applied for the appropriate city permits, paid for all necessary services the city required and obeyed all laws and regulations, and the other group did not.

The Richmond Tea Party paid approximately $8,000 to provide the required number of police and emergency personnel that Richmond officials dictated they must have as well as the required $1 million liability policy to protect the city. They assembled peaceably, provided portable toilets and trash cans at their own expense and left the park in excellent condition at the time of day required by law.

Occupy Richmond did not apply for any permits, assumed control of the park for more than three weeks denying its equal use to the public, violated city ordinances by staying in the park overnight which eventually led to several of their members being arrested and required tax payer funded support services. 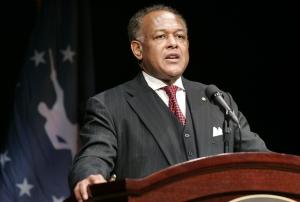 "Good Morning to all the Little People of America. My name is King Jones and I am the face of Big Government. If I agree with what you have to say, I will permit you to say it. Thank You. That is all."

Dwight C. Jones, the Mayor of Richmond, a Democratic delegate to the Virginia General Assembly and a self-proclaimed “child of the sixties” supported the Occupy Richmond movement by ignoring their lack of permits, their long-term occupation of a public space, their overnight stays in violation of city laws, and to the contrary, provided trash pickup services and police and emergency personnel for free, to be paid for by the taxpayers of Richmond to the estimated tune of $31,000 (the Richmond Tea Party (link below) has links to some of the actual invoices the city paid on behalf of the Occupy Movement).

Naturally, the Richmond Tea Party was infuriated with this unequal treatment under the law, but the Mayor didn’t care. You see it’s very simple, the Mayor supports the Occupy Richmond Movement and despises the Tea Party Movement, and as a result of this bias he purposefully used his position and power in Big Government to provide favoritism, protection from the law and taxpayer money to the Occupy Movement, while forcing the Tea Party Movement to pay for all related expenses themselves, abide by the laws, and complete all of the necessary permits.

According to Mayor Jones, the constitutional rights to assemble and exercise your freedom of speech only applies to groups he approves of. Like a King, if he does not approve of your message, then he will simply abuse his authority and make it as hard as possible for you to speak.

In response, the Richmond Tea Party submitted an invoice to the City of Richmond for the $8,000 they spent to hold their rallies at Kanawha Plaza, citing unequal treatment under the law. King Mayor Jones, not to be deterred in his support of the Occupy Movement and loathing hatred for the Tea Party Movement, simply sent a formal letter to the Tea Party to intimidate them by stating that they were about to be audited by the City.

Such is our life now with Big Government. Favor those who support you, crush those who oppose you, and if it comes to it, use the full force, power and weight of our Big Government Goliath to intimidate, manipulate and discredit.

To its credit, the Richmond Tea Party has pristine tax records and will not be intimidated. They are fighting back and will continue to demand compensation for what is clearly the abuse of authority that none of us  should ever be surprised of from our Big Government Political Thugs.

Like Loading...
‹ Ron Paul #1 in Iowa! Fourth time in a week!
Why does celebrating being American sound weird? What does it mean to be American? ›