As Obama continues to create and expand Big Government through increasing regulatory oversight, bureaucratic management of the market place and increasing compliance enforcement, the pulse of America’s economy slowly gets weaker and weaker… 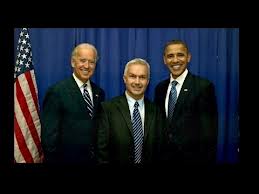 As just one of a thousand examples of Government’s destruction of America’s once great economic power house, we need look no further than Bill Keith. Bill (in picture between the tweedles) was a roofer that started a company out of his garage ten years ago using solar panels to power attic fans that would reduce the heat in your attic allowing you to save money on your A/C bills which helped the environment. Twice. First, by using the free and clean power of the sun to operate the attic fans, and second by reducing the amount of electricity that must be manufactured (assumedly from “dirty” coal, etc…) to run your A/C unit.

Bill was a poster child for the Obama campaign in 2008 and was widely interviewed on TV and invited to meet with the President. Bill’s incredible small-business and entrepreneurial story smacked of the days when Wozniak and Jobs started up Apple in their garage and was touted and advertised by the Obama administration to sell the American people on Obama’s desire to save America and return her to greatness. However, that was then and this is now. Bill is now discovering just what a fair-weather friend Obama can be.

Obama passed a regulation in May that increases tariffs on imported solar panels to “level the playing field” with domestic producers so they can compete against the Chinese by slapping an “anti-dumping” penalty on Chinese imports. Bill’s attic fans are 95% produced in the U.S. with only the solar panel being imported from Hong Kong. His manufacturer in Hong Kong says none of the components come from China but that may not matter. These new tariffs will make it too expensive for Bill to compete against, ironically, the Chinese manufacturers of a similar product.

Here’s why: China manufactures the entire attic fan (with solar panel) in China, so it is imported as an “Attic Fan” and faces no tariff. Bill manufactures most of his attic fan here in America, employing Americans who support their families by working in his manufacturing plant, but the solar panel component of the attic fan Bill assembles here in America is imported from China as a “Solar Panel,” obviously, and is therefore significantly taxed to the point that he will no longer be able to compete since the cost of this one component of his attic fan assembly will simply make his entire product uncompetitive.  That means laying off all his American workers and either going out of business or moving all production to Canada, Mexico or…wait for it…China.

Obama’s new regulation increases employment for Chinese workers and lays off American workers. What are American parents to do? Send their kids to China I suppose, since that is the only place where Obama is creating any jobs. Obama has done more for the Chinese economy than all of the Chinese politicians combined.

So a few months ago if you and I wanted an attic fan, we had a choice between a Chinese import or a competitively priced American-made attic fan, but now, thanks to Obama and Big Government, we will only have the Chinese import. Go Obama! Nice way to destroy a country – one small business segment at a time. I shouldn’t have to say it, but I will anyway; why is the Government forcing the American people to pay more for solar panels anyway? If China can make them cheaper, then let China make them. I thought the point of the “Green” movement was to have as many Americans as possible using solar panels, so if China can provide them cheaply, then more Americans will use them. Right?

But that is the lie, isn’t it? That is the bullshit we have rammed down our throats by Big Government. The reality is that American companies pay tribute to American politicians through their lobby groups and provide campaign funding on retainer. In return the politicians provide protection for their Corporate American lap-dogs by creating tariffs such as the one on Bill’s solar panels that make imported products so expensive, that Americans are forced to pay more than they should so inefficient and bloated American companies and their CEO’s can continue to bask in multi-million dollar salaries, and if a tax-payer funded bailout is needed from time to time as well, so be it. THAT is the truth.

And why is it so hard for American companies to compete against Chinese imports in the first place? Again, the blame is squarely on the same Big Government. Do you see the game plan here? Do you see the GENIUS of it? First, create so many labor and industry regulations as to make manufacturing in America a nightmare of expense which destroys American manufacturing. Then offer to protect the largest manufacturers from being destroyed by penalizing their cheaper competitive imports making them more expensive than the American manufacturers, thereby extracting more money, like a tax,  from the American consumer through higher prices so that uncompetitive American companies can continue to operate in the U.S. and then remind those companies that the only reason they are still around is because of the protection that American politicians provide and that a tribute is needed from them in the form of campaign financing, etc… if they want to keep that protection. And once that tribute has been made, there is no reason for American companies to ever get more competitive, or reduce their costs, or create new innovative products, because they are being shielded from foreign competition that would naturally require them to do these things. That means an endless string of expensive and over-priced crappy products for the American consumer so the Government and Corporate America can continue their very lucrative agreement. And then, for the finale, when Americans get upset at how much money these same CEO’s are making, or when some fraud in a service or product is uncovered, Big Government throws Capitalism under the bus blaming it for every consumer ill under the sun and tells the American people all that is needed is more Government oversight and regulation which perpetuates the cycle all over again. BRILLIANT! And Americans eat this shit up, three times a day.

Not to get too far off topic, but Big Government does the same thing with Healthcare. They limit competition as much as possible and create so many rules, regulations and requirements that Healthcare becomes very expensive. Then when Americans start screaming about how expensive it is, Government offers Government as the only solution. BRILLIANT! Americans fall for this playbook every single time.

To make it worse, and to just twist the knife a little harder in Bill’s back, the penalty tariff is retroactive to the beginning of the year, so Bill is now on the hook to pay the tariffs for his near half-million dollar order for solar panels that he placed this year. This puts his entire business in jeopardy. Typical Government. Typical Obama. Bill had no warning, so there was no way for him to determine if he should stay in business considering the new regulations, or raise his prices to cover the tariff etc.. Properly warned, businesses can make decisions to stay in business, slowly exit, change their product, drop a product line, build a reserve to cover the expected new costs, etc… but Big Gov simply dropped a bomb on Bill’s operation (and hundreds of small business owners like him that use imported solar panels for specialized purposes and employ thousands of Americans) and there is no way for him (or them) to stay afloat as an American manufacturer.

Bill emailed his one time friends at the Obama White House and all he’s gotten in response is crickets and a notification that basically says the solar panel industry is more important than the entrepreneur or the small business man, even one in the 40% tax bracket like Bill. Lest you forget, Bill is part of the “wealthy” and the “rich” that Obama wants to tax into oblivion so the “poor” can receive all their entitled benefits.

On the Peter Schiff show this morning, Bill pleaded over the air waves for anyone to help him find a manufacturer in the U.S. who could produce his solar panels, which are customized for his purposes, as he has been looking for years and nobody has been able to do it. One American company tried, but Bill gets two calls a week now to repair those units because of their high failure rate.

Looking back on his meeting with Obama and the heads of the other solar panel companies in the U.S., Bill made a revealing point. He realized that all the suits around him at that meeting were the heads of large solar panel manufacturers who were “salivating” at the thought of the Government providing tax payer dollars (and protection) to support their inefficient and bloated businesses. But it was Bill that was dangled out in front of the American people on CNN and the news shows as the “little people” who Government and Obama were really trying to help.

Democrat. Republican. Doesn’t matter. More lies. More Propoganda. More corruption. More Big Government. So what are you going to do about it?