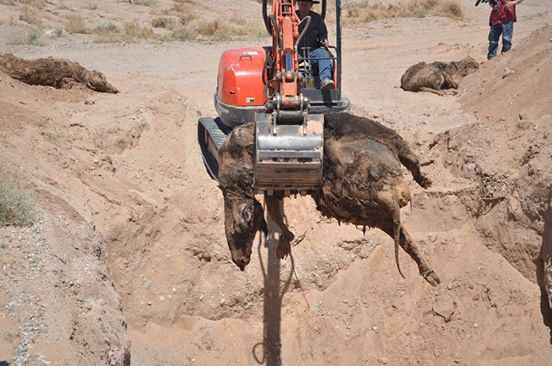 The blunt trauma of Government violence is cracking skulls and softening up our cretinous citizenry into a more supple and malleable form for consumption to their ultimate subjugation.

It’s time to lie down and feel that cold, hard, thick-treaded rubber boot crushing your throat against the hot pavement…and you better smile when they do it.

Supporting early reports during the standoff by patriot citizens on the ground, it appears the Federal Government did in fact slaughter and bury cattle in a mass grave during The Battle of Bunkerville in Nevada two weeks ago, even though they originally denied it. It’s the Government, they deny everything.

First off, since it’s probably never occurred to you, why is the Bureau of Land Management an armed, militarized force? If all they do is manage land, why are they heavily armed and ready to engage in combat against American citizens?

The Federal Government had control of that area for one week, and in that time they put, “holes in water tanks, smashed a tortoise burrow, as well as destroyed fences and water lines. Nowhere in the court order that I saw does it say that they can destroy infrastructure, destroy corrals, tanks … desert environment, shoot cattle.”

The Federal Government reports that the cattle they killed were a “threat” and needed to be killed, and yet a news reporter on the ground reports no damage to the pen to suggest that it was necessary or that the cattle had acted dangerously. And, obviously, they managed to live out their lives without being a threat to the rancher soooooo….

Separate images taken from an airplane also uncovered hundreds of cattle stuffed into small pens on a BLM compound, prompting the FAA to order a no-fly zone over the area. See how that works? Government agencies running interference for other agencies. They all got each others back when it comes to going to war with us.

The court order for the BLM was to round up the cattle and sell them to raise the money to pay the grazing fees. At what point did that become justification to round the cattle up and start shooting them? They violated a court order. Will anyone go to jail? Did anyone go to jail for the housing bust? For the NSA surveillance bust? For the IRS targeting of conservative groups bust? No. No. No. No. Does Obama follow the law when he changes Obamacare on a whim as it suits his needs? No. Does Congress seek the constitutionally required declaration  of war or just start dropping bombs? They drop bombs baby. When it’s the Government, it’s legal. Whatever “it” is. Shooting some cattle in violation of a court order? Ha! What court? What order? WE ARE THE GOVERNMENT.

Meanwhile, Comrade Reid unilaterally declared that all the protestors were domestic terrorists. And in case you’ve forgotten, “domestic terrorists” were stripped of their constitutional rights by the NDA Act, which Obama signed, which provides for indefinite detention by the Federal Government, even of U.S. citizens.

With that law, all that has to happen is someone like Comrade Reid to declare a group of troublemakers for the Government a bunch of “domestic terrorists” and they can be carted off without a charge, without a trial, without any civil rights protection.

Obama, when he signed the NDA Act said he regretted that stipulation was in the bill (liar), but he signed it anyway, saying America would never use it. OF COURSE they are going to use it. If not now, then ten years from now. You think they’re too stupid to play the long game? They’ve been playing the long game for 100 years and looking at how much damage they’ve done, it’s worked pretty damn well!

If the NDA Act was so bad that Obama was concerned about it, he’s the freaking President, he could have lined it out or vetoed it. He’s changed the PACA law over 100 times illegally, but he can’t make one change to the NDA Act? His “concern” was just some shit he needed to say to make stupid Americans do an, “Okay Wally, if you say so.” YOU ARE BEING SET UP.

And if it is such a sensitive issue, then shouldn’t a politician be careful about who he calls a domestic terrorist when everyone paying attention knows that is the “secret password” for people the Government wants to make quietly go away at some point and they passed a law that allows it to happen?

How long America? How long before it’s not cattle being found in mass graves? How long before the enemies of the Government, patriotic citizens who are demanding that this rapid expansion of a tyrannical federal government be stopped, who begin showing up in protests and rallies and resisting Government violence, legally armed or unarmed, how long before they are handcuffed as domestic terrorists and carted off ? How long before that boot of oppression starts to crush down  on every single one of us.

If you’re not scared, and I mean terrified, of what is going on all around you by your OWN GOVERNMENT, then you’re either too ignorant or you’re part of the problem.

Like Loading...
‹ Government reports, “There is no inflation” – Meanwhile, CNBC reports Inflation “aids $15B in Food Fraud”
Battle of Bunkerville – Cliven Bundy – American Revolution 2.0 – In Pictures ›