Home › Government Failures › Rockefeller admits he is part of a global conspiracy. And is proud of it.

Rockefeller admits he is part of a global conspiracy. And is proud of it. 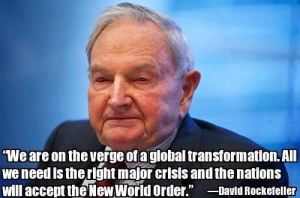 Let’s chat oh so briefly about David Rockefeller and capitalism. You don’t, and won’t, hear much about him, but he explains that in one of his quotes below.

What we have today is crony-capitalism aka “Corporate Fascism,” as Mussolini called it. A “partnering” of private corporate businesses (including the banks) and Government. Each patting the back of the other, exchanging favors, protections, money and power.

Capitalism is what we had that created the highest standard of living and wealthiest middle class in the world in less than 150 years before the corruption and greed of Government partnering with the Banks and Corporations came along starting in 1913, creating trillions in debt, destroying our purchasing power and our incomes with inflation and strapping future generations with the bills of the bailouts of the past.

And why? Because a fat rabbit draws the jackals. Banks are robbed because that’s where the money is.

When you do in 150 years what Europe could not do in 2,000 and create the wealthiest middle class the world has ever seen – you invite the predators to skim off that wealth by controlling the information, the education, the economy, the money and the banks.

That is where we are today.

It’s time to wake up to the truth.

And when Rockefeller mentions below the need for “another major crisis”…what do you guys think that will be? A false flag attack? Or could it look like this?

But if my word isn’t enough, here’s David Rockefeller (emphasis mine)…

David Rockefeller: Unashamed Predatory Globalist
“Some even believe we (the Rockefeller family) are part of a secret cabal working against the best interests of the United States, characterizing my family and me as ‘internationalists’ and of conspiring with others around the world to build a more integrated global political and economic structure—one world, if you will. If that’s the charge, I stand guilty, and I am proud of it.”

“We are grateful to The Washington Post, The New York Times, Time magazine, and other great publications whose directors have attended our meetings and respected their promise of discretion for almost forty years. It would have been impossible for us to develop our plan for the world if we had been subject to the bright lights of publicity during those years. But the world is now more sophisticated and prepared to march towards a world government. The super-national sovereignty of an intellectual elite and world bankers is surely preferable to the national auto-determination practiced in past centuries.”

—David Rockefeller, at a 1991 Bilderberger meeting

“We are on the verge of a global transformation. All we need is the right major crisis and the nations will accept the New World Order.”

“But this present window of opportunity, during which a truly peaceful and interdependent world order might be built, will not be open for long. Already there are powerful forces at work that threaten to destroy all of our hopes and efforts to erect an enduring structure of global interdependence.”

—David Rockefeller, speaking at the Business Council for the United Nations, September 14, 1994

“Whatever the price of the Chinese Revolution, it has obviously succeeded not only in producing more efficient and dedicated administration, but also in fostering high morale and community of purpose. The social experiment in China under Chairman Mao’s leadership is one of the most important and successful in human history.”

Regulatory Capture – where the Government needs to “regulate” an industry and since Government is just a bunch of black suit politicians built for the single purpose of getting re-elected, they have to hire consultants from the very industry they are attempting to regulate. In other words, the corporations become politicized and now become the wolf seeking to guard its own hen house. So is it any wonder why it becomes so easy for corporations to negotiate and cut deals and secure protections when THEY become THEIR OWN regulators? This is crony-capitalism.

Like Loading...
‹ How the hell would private roads work you idiot?
Big Government – Class Section 101 – How to force the taxpayer to pay your student loan ›