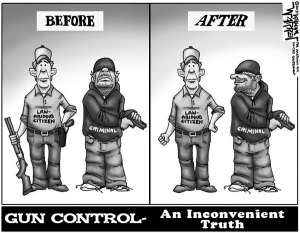 I found an incredible way to reduce gun violence by 63%. Tell the truth. 63% of gun violence statistics, like the ones Obama and Hillary use, are suicides.

So is this “gun violence” a gun problem or a right to die problem? Perhaps if we let people, and not the State, control their own bodies, people would not use guns so often to take their own lives.

I just read an article from the NYT which begins by supporting the right to bear arms by admitting that Liberals over-blow the threat of guns and often cite inaccurate data or predictions which only undermines their interests.

Then it gets ugly.

The author of this article, like Obama and Hillary, first tosses out a Careless Big Number (CBN), in this case 1.45 million gun deaths, but omits information you would need to make a rational decision. The author, Nicholas Kristof, does not mention how much of that CBN is from suicides, he only mentions that suicides are included, as are accidents, as are many things one does not often associate with gun murders I’m sure.

What if I said that 3,000 people were murdered in New York City in 2001? You’d say we have a murder problem. What if I said that 2,606 of them were on 9/11 in the World Trade Center building? Now you’d say we have a terrorist problem. If you acted without all of the information, you’d be fighting terrorists in the Middle East by confiscating guns from Americans in Kentucky.

So what do we have? A gun problem or a suicide problem? Kristof likes to keep us guessing.

If suicides are 63%, then that 1.45M gets quite a bit smaller, doesn’t it? Accidents would also reduce that number, but by how much he never kisses and tells. Accidents would be a training and education problem, not a gun homicide problem.

Kristof links to another article, instead of just citing the data himself, perhaps his digital pen was low on digital ink (emphasis mine)…

These figures refer to all gunfire-related deaths, not just homicides. In fact, homicides represent a minority of gun deaths, with suicides comprising the biggest share. In 2013, according to CDC data, 63 percent of gun-related deaths were from suicides, 33 percent were from homicides, and roughly 1 percent each were from accidents, legal interventions and undetermined causes.

There’s a risk in using a statistic like this to decry mass homicides carried out with guns. Using total firearm-related deaths makes the case against guns more dramatic than just using homicides alone.

We know we have a manipulative politicians and liberal media problem, so I will ask again, what other problem do we have? A gun problem or a suicide problem?

Nicholas goes on to say that we should take a risk-based approach, and perhaps ban guns from those who abuse alcohol or those who beat up their domestic partners. But what does “abuse alcohol” mean? For the anti-gun crowd, the low hanging fruit will be anyone with a DUI.

For 2013 there were 1.2M DUI arrests in the United States. There are only 245M people over 21 in the U.S., so if they legislate that a DUI arrest, all by itself, makes you ineligible to own a gun, then they can strip 10% of the population from their 2nd Amendment rights over just a 20 year period. Liberals don’t often take the heads-on approach, they like to outflank their opponents. This would be a good way to do it.

Since there seems to be a move to lower the drinking age to 18, we can expect even more Americans to potentially lose their 2nd Amendment rights as 18 year old’s are not known for their plethora of rational good decision skills. That the possibility of “alcohol abuse” to ban guns while also lowering the drinking age are both being suggested by left-leaning pundits seems oddly coincidental.

And what of gun bans using the “domestic abuse” angle? Over 2M men every year are falsely accused of domestic violence. Often by women using it to leverage child custody. You add that 2M false abusers to the 1.2M DUI’s and you can see how it won’t take long for anti-gun liberals to disarm quite a large slice of the American pie.

Why try to overturn the 2nd Amendment, a Sisyphean task, when you can just tack losing your right to bear arms onto any random charge of anything by anyone that raises your “threat score” from 1 to 2. Where “1” is being a total dairy cow for the State farm and “2” is having made a mistake or being accused of something you didn’t do. Because nobody makes a mistake and women never get angry enough to accuse men of things they didn’t do. 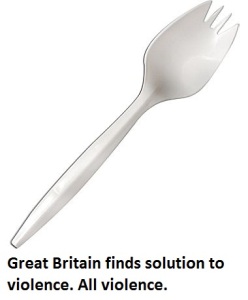 Kristof then says that 10% of “gun” murders are of intimate partners. Well that didn’t help this girl and her boyfriend since knives, unbelievably, are for sale even in grocery stores. The British have solved this problem though…so, something to look forward to.

In closing, the article that Kristof linked to also mentioned that Kristof has cited the benefits of the Australian gun ban in his other articles. That debate will be presented in another post, but what Kristof and his ilk fail to mention, which we should be used to by now, is that Australia did not only ban guns, they confiscated existing ones. So unless you are ready to go door knocking and tell every American to hand over their guns, drop the “Australian” argument, it makes you look grossly uninformed.