Home › Government Failures › To the youth of America. Let me show you the rat race in one image.

To the youth of America. Let me show you the rat race in one image.

The male brain is not fully developed until about the age of 25, or so I have read. Prior to that time, as the brain is making those final connections, like suspension bridges reaching past the horizon across the chasms of the mind, one day enabling the collection of wisdom via fourth order thinking to extrapolate accurate conclusions built upon imperfect information; I experienced sporadic fits and spits of higher order thinking that struck me from time to time as unusually prescient compared to what I normally thought about back then, like girls.

Like an engine misfiring, I found myself, in my youth, having brief moments of wisdom beyond my years which, for the most part, I discarded due to having insufficient experience to even recognize them as wise. I believe we all had those moments.

I am also struck by how those moments stuck with me, despite my casual attention to their meaning, and 25 years later, I would like to post one of them here.

When I was young, it ‘struck’ me, that no matter what you drive, there will always be someone driving a nicer, better, faster, sportier, more luxurious, cooler, classier, whatever it is that motivates you about cars; car than you. Therefore, since that competition can never be won, there is no point in playing.

Like Joshua, the mega-computer in the movie War Games that calculated the odds of victory in any given scenario of nuclear war with the USSR said, “A strange game. The only winning move is not to play.”

That realization, to not play, rationalized my reasoning behind keeping my paid-for 1991 Chevy pickup for 25 years, never making a car payment in all that time, a conservative savings of $90,000 + lower insurance premiums.

For decades I wanted to create a visualization of my thought process on this point, from oh so many years ago, to make it easier for others, specifically the young starting out and under so much peer pressure and societal pressure to conform, to understand.

And this transcends beyond cars. Cars is just an example of the overall challenge to resist the pressures that exist all around us, for so many things.

So today, I completed that little project, this image I have carried in my mind for over two decades, and I am posting it here. I think it speaks for itself on why not playing the game is the only way to win.

The lesson here is that our default position tends to be to buy the maximum that we can afford, or qualify for, and therefore each of us naturally settles out on this list based on our household income, credit score, budget situation, risk tolerance and family structure thus exposing to the rats in the race exactly where we sit on the ladder in the rat race hierarchy.

I will use Audi as my ladder example, but almost any car company would do.

Lastly, this is an example for instructive purposes only, to communicate an idea, a concept, for you to extract the greater meaning and purpose of the message, not to get lost in the weeds of whether the class titles are appropriate for the car and price. 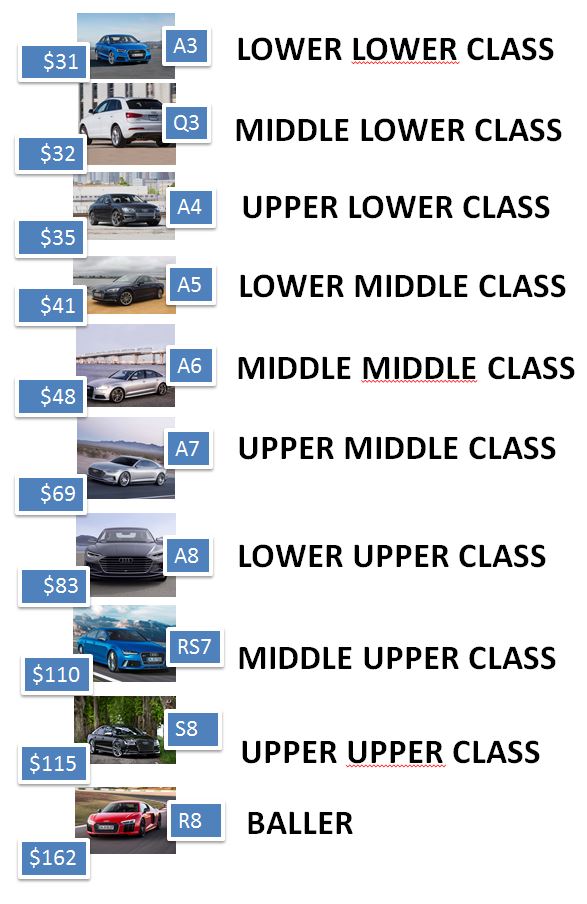 If you can’t afford baller, quit while you’re ahead.

Like Loading...
‹ It’s not about Clinton or Trump. The forest for the trees.
Your Shower Is Lame, Your Dishwasher Doesn’t Work, and Your Clothes are Dirty ›