The Boston Globe posted the interactive map below on their website moments ago, which was quickly pulled as soon as a blogger posted this information on Twitter.

There is no way the Boston Globe has any of this data.  It is far too early to know any of these numbers which means the data is fake.

Attempting to call an election hours before the polls close is irresponsible.  Is the Boston Globe attempting to influence the election results by prematurely showing that the Democrat candidate already won?

This tactic is often used with exit polls.  Exit polls are informal surveys of individuals leaving a polling place and asking them who they voted for.  The exit poll data is collected or manipulated in such a way that early exit poll reports can cause many voters to not bother showing up because the winner seems to have been chosen already.

Was this interactive map posted 8 hours in advance and pre-populated with results from every town in Massachusetts an accident, or an attempt to influence an election? 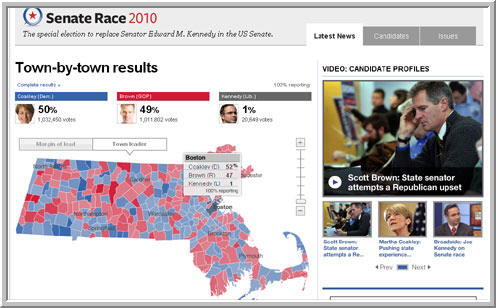