Government bans over-the-counter asthma inhaler to save the environment 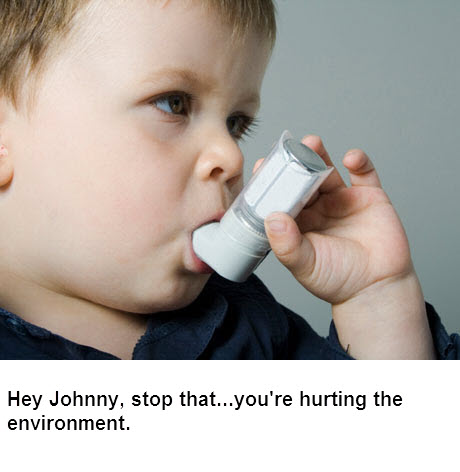 I hope when this kid grows up, he joins me in voting to get rid of the FDA.

The federal government is banning the sale of Primatene Mist (among others), an OTC medicine used by asthma sufferers. Not because the drug is illegal or dangerous, but because the propellant used to eject the mist from the container contains CFC’s which are theoretically considered a dangerous compound that maybe depletes the ozone layer thus possibly hurting the environment.

First, there is no way the federal government should be forcing citizens to setup an appointment with a medical care practitioner to get an asthma inhaler prescription and incurring the associated costs and hassles just because the government wants to remove a miniscule amount of a possibly harmful gas from the atmosphere. For those who can’t afford that, guess who will pay for it? US, the taxpayers through government medical programs or US, the consumers when we pay more for other products made by these companies that are subsidizing low-income users that have to pay more now for alternatives.

Let’s give this so-called “problem” some perspective. Cows emit 400 quarts of burps per day which are loaded with methane. Methane is the most harmful greenhouse gas after water vapor and CO2, you know…the same CO2 you release every time you exhale. Up to 18% of the greenhouse effect is caused by methane and a larger amount by CO2. So what besides cow burps causes methane?

“There are several major sources of methane: rice paddies (methane-producing bacteria thrive in the underwater environment), swamps and wetlands (ditto), mining and oil drilling, landfills, termites (although there’s still some controversy on this one), “biomass burning” (notably in the Amazon rain forest), and animals. Ninety percent of animal methane is produced by ruminants (i.e., cud-chewers). These include sheep, goats, camels, water buffalo, and so on, but most of all cattle, of which the world has an estimated 1.2 billion.” ~ Cecil Adams from thestraightdope.com.

So even though the CFC’s used in OTC asthma inhalers is nothing compared to naturally occurring methane and CO2, our government is going to ban its use and force citizens that currently enjoy this low-cost alternative to their medical problems to spend more money (if they have it) on an alternative solution…or go without it…or make us pay for it.

The graph below shows how much each type of gas contributes to the greenhouse effect. Little Johnny never stood a chance against our Government.

Why not require cow burp recycling procedures, or banning rice paddies, or eliminating oil drilling or draining all the swamps and wetlands in America? Any of those would do more to save the environment than banning OTC asthma inhalers. Why does the government invade people’s lives, waste its time and other people’s money on nonsense such as this?

Because they can. Because we let them.

Again, just another example of government running a muck over our individual freedoms and rights, ignoring the constitution and basically doing whatever the hell it wants. Saving the environment sounds good on CNN and MSNBC, never mind the asthma sufferers…they aren’t a big enough voting block and they certainly aren’t organized enough to mount an opposition. To a politician, that means they don’t exist. The majority of us fall into the same category. Too small. Too unorganized. That means our freedoms and rights are the ones ripe for the political picking.

I discovered this abrogation of our freedoms in a Rush Limbaugh publication, but I always research what I read there to try and get the whole story. Accordingly, I discovered that Ronald Regan was the one who signed the CFC reduction treaty into law in 1987 via the Montreal Protocol. Reagan is one of my favorite presidents and I subscribe to all of his small-government philosophies. It remains a mystery to me, and others, why he would ever strap the United States to any international treaty, law or organization, but this is one of those times. I’d like to think that he never thought the government would take a ban on the use of a chemical compound such as this one beyond commercial and industrial use, right down to what someone uses to relieve their asthma suffering. At the same time, he was repeatedly against any government involvement in the freedom of Americans. So to me, this is an enigma. That said, the current administration could simply not let this happen…but government being what it is, they are going to do it anyway.

Makes me wonder. If the only cancer cure available had to be delivered using CFC’s, would the government let us use it, or would cancer patients everywhere be subjected to death to save the environment? Sounds extreme, but really, what’s the difference? If it’s not good enough for asthma patients, then it shouldn’t be good enough for anyone, for any reason. Or will we let government decide who can use it and who can’t? Under what circumstances? Under what limitations? Will there be a waiting list for CFC-delivering cancer cure medications to limit how much is released into the environment at any given time? Do you see what I mean? At some point, the discussion gets ridiculous, but that is what happens when you allow government agencies and bureaucrats to get involved in controlling every minute aspect of our daily lives.

Click here to see the ban on the FHA website, where it also explains how you’re a better human being for it, saving the environment and all. Sucker.

Articles on removal of CFC inhaler and global warming here and here.