The following passage from The Grapes of Wrath by John Steinbeck is part of a companion post from earlier today titled, “Have We Forgotten How To Raise Boys Into Men?”

I read The Grapes of Wrath for the first time a few years ago at the beginning of the recession. This passage stayed with me and I think of it often.

The story begins during the Great Depression in America after a tremendous dust storm during a long drought finally wiped out all the crops. The scene is the rural and devastated farmland of America in the early 1930’s…but the message of this specific passage is about men…not boys. After reading the following excerpt, ask yourself how many men you know, within your friends, within your family, that would not “break?”

The people came out of their houses and smelled the hot stinging air and covered their noses from it. And the children came out of the houses but they did not run or shout as they would have done after a rain. Men stood by their fences and looked at the ruined corn, drying fast now, only a little green showing through the film of dust. The men were silent and they did not move often. And the women came out of the houses to stand beside their men-to feel whether this time the men would break. The women studied the men’s faces secretly, for the corn could go, as long as something else remained. The children stood near by, drawing figures in the dust with bare toes, and the children sent exploring senses out to see whether the men and women would break. The children peeked at the faces of the men and women, and then drew careful lines in the dust with their toes. Horses came to the watering troughs and nuzzled the water to clear the surface dust. 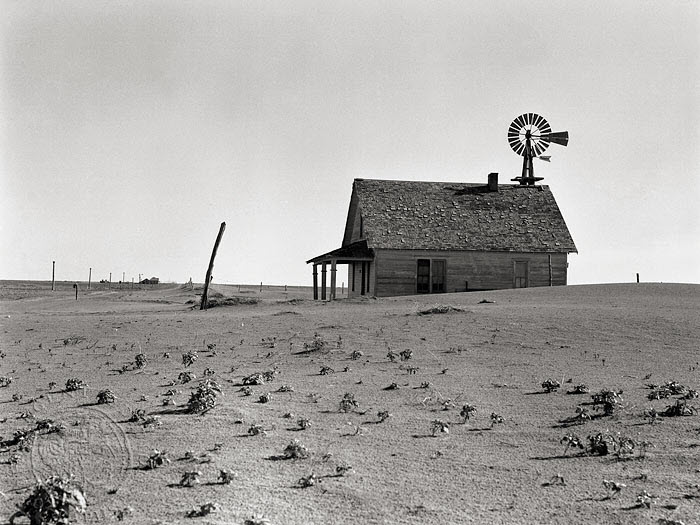 After a while the faces of the watching men lost their bemused perplexity and became hard and angry and resistant. Then the women knew that they were safe and that there was no break. Then they asked, “What’ll we do?” And the men replied, “I don’t know.” But it was all right. The women knew it was all right, and the watching children knew it was all right. Women and children knew deep in themselves that no misfortune was too great to bear if their men were whole. The women went into the houses to their work, and the children began to play, but cautiously at first. As the day went forward the sun became less red. It flared down on the dust-blanketed land. The men sat in the doorways of their houses; their hands were busy with sticks and little rocks. The men sat still – thinking – figuring.

Like Loading...
‹ Have We Forgotten How to Raise Boys Into Men?
Unprecedented Numbers: 26 Million Americans are out of work, underemployed or just decided to give up. ›

Tags: failure of society, John Steinbeck, men versus boys in America, social disintegration, The end of men, The Grapes of Wrath, where are all the real men