*UPDATED* Super Bowl 2012 Will Use Airport Full-Body Scanners – Your Local Mall Is Next? PLUS – Homeland Security Develops New Interrogation Techniques, PsychoAnalysis, & Use of Lie Detectors at “Security Events,” i.e. Concerts and Stuff…

As posted by InfoWars, the TSA now denies the use of full-body scanners at the Super Bowl:

UPDATE: Although WPRI’s Matt Touchette writes that “Lucas Oil Stadium told me I had to quote, “go through the body scanners” before entering the stadium for the tour,” he now claims “they are in fact metal detectors,” after calling them “full body scanners” in his original post, which has now been changed. We’ll have to wait until Sunday to find out for certain whether or not x-ray body scanners will be in use before the game, but the TSA tweeted this afternoon, “”TSA will not use body scanners for patrons coming to the Super Bowl at Lucas Oil Stadium.”

Given the fact that the TSA has been caught lying about innumerable different issues, their assurances are hardly bullet proof. Super Bowl attendees can however be safe in the knowledge that they and their kids will definitely receive a full grope-down before being allowed to enter the stadium.

The Super Bowl is using full-body pat downs from the ankle-up, the same ones used at the airport and are asking fans “to be patient.” Is it just me, or is that how the full-body scanners eventually make their way into places like this? First, you inconvenience the public with time-consuming pat-downs creating long lines and irritating everyone. Then you wait until everyone is good and pissed off, and the Government says, “OR…guys…you COULD just step through this handy-dandy radioactive scanner and be done in a jiffy! More time for your panem et circenses!”

In other news, Super Bowl hot dog vendors being trained by the TSA. More here.

According to WPRI.com News Reporter Matt Touchette, the airport full-body scanners the Government uses against us are currently on-site at the Lucas Oil Stadium, home to this weekend’s 2012 Super Bowl. 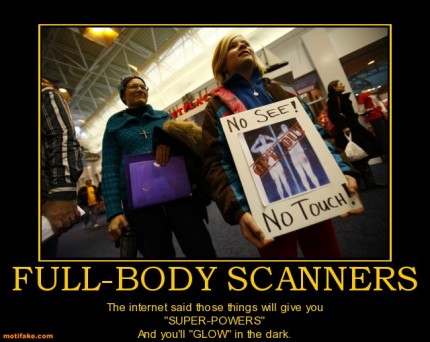 Full-body scanners are just for airports right? Wasn’t that what we were told? It’s for airports because that is where we are most at risk? Silly Americans…willing to gulp down lie after lie after lie from their own Government. Even as I argue with the TSA at the airports when I opt-out of the scanners, they all tell me the same thing…”We have to protect the flying public” and my favorite…”This is just how it is.”

What a pathetic, spineless, cowardly defense of Tyranny.

In a post I wrote earlier, I talked about how the full-body scanners are an invasion of our Constitutional rights, and how it makes no sense for the Government to limit installing them at just airports. The 4th Amendment that protects us from unreasonable search and seizure is why police can’t just stop you at the mall and pat you down, or pull you over and search your car, or knock on your door and search your house. But under the tyrannical banner of WE ARE AT WAR, Government will trample over every protection the Founders gave us and invade every aspect of your life the moment you step into any area they can force their control over.

Don’t think so? I remember when I suggested to people that the TSA would not stop at airports. People thought I was crazy. CLEARLY, the scanners were in response to the 9/11 attacks so they would be limited to airports. Right? RIGHT?

Aside from the Big Brother issues, there is mounting pressure on the TSA to admit that their machines can cause cancer, but the TSA refuses to participate in any of the testing that is being requested. The quotes below are from an article on the Prison Planet website…

Senator Susan Collins, ranking Republican on the Homeland Security and Governmental Affairs Committee, yesterday introduced a bill that would require an independent study of backscatter x-ray scanners, following the TSA’s about-face on a decision to test the machines. The federal agency also backtracked on a promise to test TSA workers themselves for radiation exposure last month.

So the TSA refuses to test the machines or their workers. What does that tell you? Still want to TRUST your government and go through one of those machines? The Government hasn’t taken away all your rights yet…you still have the right to get cancer, I suppose…

Numerous studies conducted by prestigious universities and health authorities, including Johns Hopkins, Columbia University, the University of California, and the Inter-Agency Committee on Radiation Safety, have warned that the x-ray scanners will lead to an increase in cancers.

Johns Hopkins’ biophysics expert Dr Michael Love warned that, “statistically someone is going to get skin cancer from these X-rays,” after conducting a study of the naked body scanners.

Back to the Super Bowl…

“There will be a security perimeter around the stadium through which all fans must pass before entering the gate,” reports Yahoo Sports, adding that fans should not feel “self-conscious about getting patted down” because “this is the world in which we live now.”

This is the world we live in now because we allowed our world to be this way. But scanners are just the beginning, as you will see below, Big Government is setting up trailers to scan our behavior at an event, allow for our removal to a trailer for interrogation, psychoanalysis  and subjection to a lie detector. Isn’t it great to be a FREE American?

Homeland Security is also developing technology to be used at “security events” which purports to monitor “malintent” on behalf of an individual who passes through a checkpoint. The promotional video for the program explains how “Future Attribute Screening Technology” (FAST) checkpoints will conduct “physiological” and “behavioral” tests in order to weed out suspected terrorists and criminals.

The clip shows individuals who attend “security events” being led into trailers before they are interrogated as to whether they are terrorists while lie detector-style computer programs analyze their physiological responses.

We brought this tyranny down on ourselves. Are there enough Patriots left to change it?

Last year, the NFL announced its new policy would be to conduct pat downs of all people entering stadiums nationwide, a measure required as a result of NFL’s partnership with the Department of Homeland Security.

Ah…the corporate/government partnership. Now it all makes sense. Isn’t the Corporatism of America what everyone is afraid of and complaining about? Isn’t the Government being in bed with the banks, the media conglomerates, car companies and Unions what allows them to control us and monitor us? Corporations and Unions supporting Big Government expansion in exchange for being allowed to operate without “too much” government oversight. A little pay to play? A little pat my back and I pat yours? You can practice free-market Capitalism…for a price?

This is all our fault. And it will only get worse. If you are not taking action yet, you need to start, because none of this is going away or even slowing down until you do.

Like Loading...
‹ Congress Raises Debt Ceiling…AGAIN…now up to $16.4 TRILLION…Three Minute Video Explains Our Nightmare, it’s a MUST SEE!
‘End of the Road Documentary’ – Once released, EVERYONE needs to watch this documentary…your future depends on what you will learn from it. ›