Home › 2012 Election › Obama fails to keep his 2009 pledge to cut deficit in half – Deficit skyrockets instead – Proposes draconian tax hikes – Why? So the debt increases by only $1.3 trillion – More Obama, More Debt

Obama fails to keep his 2009 pledge to cut deficit in half – Deficit skyrockets instead – Proposes draconian tax hikes – Why? So the debt increases by only $1.3 trillion – More Obama, More Debt

Obama submitted his $3.8T budget to Congress. Inside his proposal were the following economically devastating tax hikes:

That means, we still add $1.3T in debt on top of our current $15.3T in debt, with no end in site. In 2009, Obama pledged to cut the deficit in half by the end of his term. Instead, he has exceeded a trillion dollars for four straight years. And there are still people walking around that would vote for this idiot again? I’m embarrassed for you.

These taxes will divert more capital out of the United States as the wealthy and those who make more than $250,000 a year (who I do not consider wealthy) move their money, investments, and potentially themselves, to other countries. All Obama is doing is making the United States the most acidic and inhospitable environment for wealth creation, capital investment, expansion and entrepreneurship in the world. He is effectively driving out every business minded and creative visionary in the country.

This is the long slow death of our economy. Obama and the government will continue to raise taxes, which drives more people and their money out of the country and before you know it, there is nobody left to pay all the bills. Nobody left to pay the social security payments, to pay for the military machine, to pay for the bailouts, the government union pension plans, bailing out the post office and Amtrak, paying for medicare and medicaid. Eventually, the Government will run out of someone elses money to spend.

The people burning down buildings and lighting the police on fire are not vigilante criminals. They are not felons. They are middle-class government union workers and Greeks receiving some type of government aid. This is what happens when a government runs out of other people’s money and the parasites in society that have lived and depended on bloated government salaries, healthcare benefits and pensions and leaches living off of government aid and subsidies are told they can no longer do so.

This is how Athens burns. Obama is running out of someone else’s money. So which of our cities will be the first to burn? 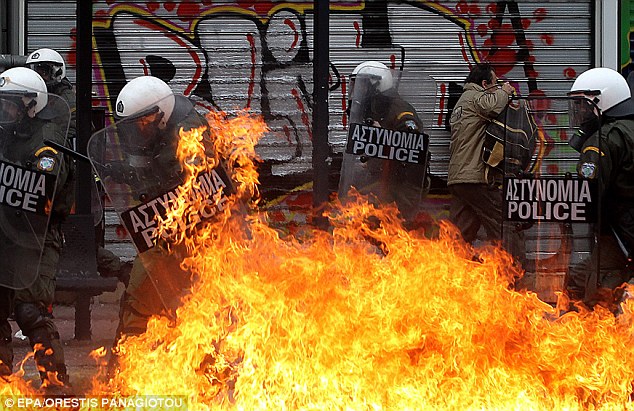 Like Loading...
‹ Obama admits the Constitution and the Bill of Rights are making it hard to do what he wants with America
Dad blows away daughter’s laptop with a .45 caliber gun – Why people are dishonest about why they don’t like what he did… ›