Home › 2012 Election › Democrats announce to all U.S. Citizens: “Government is something we all belong to” – or inversely – “You all belong to the Government”

Democrats announce to all U.S. Citizens: “Government is something we all belong to” – or inversely – “You all belong to the Government”

Then there are the crowds we all move through as we establish our careers, fall in love and reach for our dreams…the single crowd, the renter crowd, the minimum wage crowd. Then the married crowd, the home owner crowd and the mommy and daddy crowd. The clunker, the hot rod, the minivan and the Cadillac crowd.

All of these crowds we knowingly and willingly become a part of. In fact, we often work hard and sacrifice to move into and out of them. We have the freedom to belong to or reject, or to pursue or avoid any crowd there is. But that is all about to change.

The Democrats at the Democratic National Convention announced this week that all U.S. citizens belong to a new crowd, the Government crowd. What? Didn’t get the memo?

That’s right, as of Monday of this week a video was shown at the DNC announcing that, “Government is something we all belong to” which if you simply take the inverse of the sentence is the same as saying, “You all belong to the Government.”

A Time for Choosing posted a video showing the DNC promo declaring our new allegiance, and we will be allegiant whether we like it or not, kicking or screaming.

Don’t be tempted to shrug that message from the Democrats off and chalk it up to semantics. The message is subtle, but it’s clear. The Democrats want us to look to Government as a friend, as someone we can turn to in times of need, in times of unfairness, and in times of sorrow.

The reality is, I don’t want to belong to my Government. I want as absolutely little to do with my Government as humanly possible. I can get by just fine without them and I have been for 30+ years now, in fact the less they involve themselves in my aspirations, the less likely I will ever need them.

Which is the point, isn’t it? Think about it. If they tax us enough, and control the economy enough, and socialize us enough…there is no possble way for us to move up, to gain wealth, to acquire assets, to make long term growth investments, to save enough money for ourselves and for our futures. Because of Government interference in the free market, our investments will do badly, our savings will only get 0.9% a year in growth because Government suppresses the interest rate, our career aspirations will be stunted by Government induced high unemployment, our saving power will be constantly assaulted as Government created inflation and periods of alternating Government caused unemployment between husband and wife drain the family funds, medical expenses will continue to rise and take ever larger chunks out of the family income because Government has passed so many laws and controls and regulations on health insurance that the health insurance market has been destroyed, so families will spend most of their time just trying to keep their heads above water because of all the Government distortion in the free market and when it comes time to retire, they will be exhausted and with barely a penny to their name…and all that will be left for them is to turn to the Government for help. I can hear the voice of Government now…”GOTCHA!”

This video is just one more example of why Americans must accept the fact that we don’t have the two-party system we thought we had, or should I say, that we were taught we had by our  Government school system.

What we have now are the Democrats (formerly called Republicans) and the Socialists (formerly called Democrats). Both parties are to the left of center. How do we know this? Because I challenge anyone to tell me which party of the current two-party system is right of center (and no whining about the Libertarians – I love ’em too but we don’t have a three party system).

In all of our history, the word “conservative” did not mean Catholics, Christians, Pro-Lifers or the Wealthy. That is the modern defamation of a historically significant word. Conservative has always meant fiscally conservative. You could be a Catholic, a Christian, a Pro-Lifer or Wealthy, Black, White, young or old but you were one or more of those or other things AND; a hyphen(-) fiscal conservative. So if being conservative means fiscal conservative, regardless of whatever else it means in modern times, and neither the Democrats nor the Republicans have any plans to actually be fiscally conservative, then both those parties are left of center and Americans are left with no choice except “mostly liberal” or “damn liberal.” 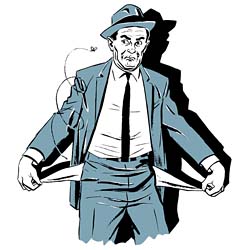 That is why videos that are warming us up to accept our nanny state Government, and more of it, should be no surprise from the Democrats (Socialists) and that the best fiscally conservative idea coming out of the Republican (Democrats) arena is to cut Medicare expenses…ten years from now.

Ironically, the only thing that will defend the American citizen from ultimate destruction is 5th grade math. Neither party can continue spending into oblivion before the chickens come home to roost and we are forced to pay that debt back….and all we have to show for it are empty pockets.

That will be our reckoning. What do you think reckoning +1 day will look like?