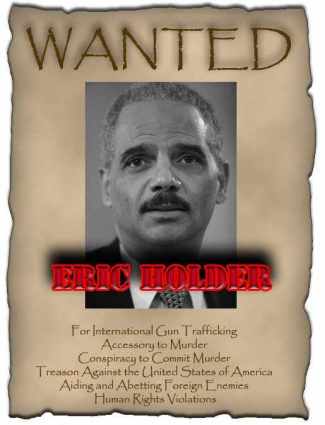 Blogger’s Note: The facts outlined in this post have developed over the past two years and I have not blogged on this situation because it continued to evolve, and always in a way that exposed the deep corruption within our Government. I naively hoped those responsible would be held accountable and the story could be told with an ending, but the level of corruption and protection only continues to expand preventing an end with justice. Univision’s breaking news about the deaths of innocent teenagers has prompted me to begin documenting this corruption.

Eric Holder, the disgraced Attorney General of the United States, an embarrassment to Americans everywhere, and one of Obama’s highest ranked soldiers in his effort to undermine the foundation of the United States, has received new calls for his resignation after 60 teenagers were shot at while attending a party in Juarez, Mexico with 14 of them slaughtered by a gun that Eric Holder, under Obama’s administration, allowed to be sold to Mexican drug cartels during Operation Fast & Furious.

It’s no secret that Liberals stay up nights daydreaming about how to upend the 2nd Amendment, or at least weaken it to the point of impotence. However…Liberals are not stupid (well, not the ones in charge anyway) and they are aware that support for the right to bear arms is at a high tide as shown by gun and ammunition sales skyrocketing since Obama’s 2008 election, including a record breaking month earlier this year.  In January, the FBI reported 1.5 million background checks were performed on American gun buyers, a record high.

This has cautioned Liberals away from direct assaults on the 2nd Amendment less it raise the ire of millions of newly minted gun toting (and voting) citizens. In such cases, Liberal assaults on Constitutional foundations dive deep. In this case, Obama and his pet rock Eric Holder teamed up to create Operation Fast & Furious.

The Department of Justice (DOJ) has created many of these programs under both blue and red Presidents and they are referred to as “gun walking” operations. The premise is simple; the DOJ allows and works in conjunction with reputable and legal gun sellers here in the U.S. to set up straw purchases that allow guns to be sold to individuals believed to be part of Mexican drug cartels or various other miscreants, then permits them to “walk” away from the transaction while keeping them under surveillance. At some point these little fish will come in contact with the bigger fish to transfer their newly purchased firearms at which point FBI agents and others swoop in and gather up the whole lot of ’em, including the walked guns.

Gun walking sounds to me like a reasonable and efficient way of exposing and apprehending the bad guys while maintaining reasonable precautions regarding public safety. I would support such an operation under any President.

But now that we understand the premise for gun walking operations like Operation Fast & Furious, and we know that as long as America is at a high water mark in support for the right to bear arms, thus forcing Liberals to go deep in order to continue their undermining operations beneath the Constitution, how would a Liberal use a gun walking operation to undermine the 2nd Amendment?

Easy. Don’t bother getting the guns back.

In Operation Fast & Furious, Comrade Holder simply changed the conditions of the operation so the guns were not recovered and instead, were allowed to disseminate throughout the criminal organizations of Mexico without any accountability or reliable method of tracking them. Ultimately, these guns would show up in bloody urban battlefields in Mexico and on our border and their serial numbers would be traced back to legitimate gun dealers here in the U.S. allowing Obama and Holder to use their puppet media networks to slash and burn the 2nd Amendment in every living room across America while pictures of innocent and bloody Mexican citizens are played on a slideshow behind propaganda spewing talking heads on CNN, ABC, NBC and CBS denouncing the evil of the NRA, of guns, gun sellers, gun manufacturers, gun owners and toy gun toting children everywhere. Show enough blood and guts to enough distracted and apathetic Americans and blame it all on guns and weak gun laws and suddenly the Politicians can rally enough support to pass more gun control legislation.

That was the plan, until both Obama and Holder were forced into a, “Whoops – My bad” moment.  Two of the 2,000 guns (many of them AK-47 assault rifles) that Obama and Holder allowed to be sold to brutal Mexican drug cartel thugs, rapists and murderers, boomeranged and were found at the scene of a bloody border battle between U.S. Border Patrol Agents and Mexican Drug Cartel thugs that led to the death of Brian Terry, a United States Border Patrol Agent. It was the death of a loved son and respected defender of the Constitution that led to the exposing of Operation Fast & Furious as well as how this gun walking operation was performed differently than those before it, and most importantly, why.

Predictably, Holder and Obama have used every damage-control tool in the Liberal toolbox. Since a Congressional investigation began into Operation Fast & Furious, Obama has abused his executive privilege power to bury documents that Holder did not want publicly released. Holder was then held in contempt by Congress for failure to produce the documents himself.

Now we come to discover that over a thousand of the guns Obama and Holder sold to Mexican criminals still have lots of people left to kill, as reported by Univision, a spanish-language network:

On January 30, 2010, a commando of at least 20 hit men parked themselves outside a birthday party of high school and college students in Villas de Salvarcar, Ciudad Juarez. Near midnight, the assassins, later identified as hired guns for the Mexican cartel La Linea, broke into a one-story house and opened fire on a gathering of nearly 60 teenagers. Outside, lookouts gunned down a screaming neighbor and several students who had managed to escape. Fourteen young men and women were killed, and 12 more were wounded before the hit men finally fled.

How is it possible that a spanish-language news network can perform the simple task of comparing a list of gun serial numbers reported by Mexican police from guns found at crime scenes in Mexico against a list of gun serial numbers reported to be part of Operation Fast & Furious and yet our own Congressional investigation could not? Incompetence? Corruption? Cover-up? Take your pick. Whichever you choose, it’s obvious something is seriously broken and our own Government can not be trusted to perform even the most elementary tasks.

As to what Mexicans think of America’s gun controls, Mexican President Felipe Calderon supports the curtailment of our 2nd Amendment and urged Congress in 2010 to enact more gun-control legislation:

Calderon has been a frequent critic of American gun laws. During a 2010 address before a joint session of Congress, the outgoing Mexican president urged Congress to reinstate the assault weapons ban that expired in 2004.

“I fully respect, I admire the American Constitution. And I understand that the purpose of the Second Amendment is to guarantee good American citizens the ability to defend themselves and their nation,” Calderon said. “Many of these guns are not going to honest American hands, instead, thousands are ending up in the hands of criminals.”

At least Calderon was right about one thing, many of these guns are not going to honest American hands, and are instead being  funneled by our own Government with Obama and Holder’s blessing to Mexican drug cartels for the slaughtering of countless innocent Mexican men, women and children. Eliminating the 2nd Amendment will not save one Mexican life when the “criminal hands” President Calderon should be talking about are thugs like Obama and Holder who are busy gun running for the Mexican Cartels.

At least when a brutal story like that of 14 teenagers being mowed down by guns Obama and Holder authorized for sale to Mexican drug cartels breaks onto the scene, we can expect the main stream media outlets like ABC, NBC, CBS and CNN to spend at least as much time reporting on that as they do producing flashy STORM WATCH chyron on hurricanes in the middle of the Atlantic, right?

As reported by John Nolte on Breitbart.com, the state-controlled media outlets are yet again ignoring this additional and highly damning investigative piece that would certainly harm Obama’s re-election efforts and shine an even brighter light on Comrade Holder:

Nothing shows how much the media wants to downplay this story more than the ABC News site, which finds the Fast and Furious scandal a lower priority than Woman Sues Over Personality Test Job Rejection, Anne Hathaway Marries Adam Shulman, Banned Books Week: 10 Books That Keep Censors Jumping.

Why do I single out ABC News? Univision and ABC News enjoy a partnership. So what you have here is ABC downplaying the superb investigative work of its own partner.

So what does all this mean? Nothing, really. The main stream media will successfully bury the Univision story, Eric Holder will never face any real danger from our Congress or his own DOJ (and he knows it), King Obama will successfully use his monarchal power of executive privilege to repress any additional documents or information that will put himself or any of his soldiers in harm’s way (and he knows it), Democrats will continue to pound the table for more gun control legislation whenever someone anywhere in the world is shot, or shot at, some intelligence agency somewhere will note this post in their folder on me, and the majority of the American people will go about their lives oblivious to the corruption and hostile takeover of their own Government…which goes to show you that it’s just another beautiful day of Government corruption in America.

You can watch the Univision investigative report here, with english subtitles.

Like Loading...
‹ The Danger of Ignorance
Obama Admits During the Debate that his Dream for America is Socialism ›