I was reading a recent article about Richard Snowden, an American hero and patriot. Liberals often argue that it is okay for the Government to record all your emails, IM’s and text messages for “our safety” because if you have nothing to hide, there is no reason to be concerned about it.

Of course, I often wonder if these same Liberals, hiding behind this same cowardly defense, would be okay with the Government entering their home at any time, stopping them on the street for a pat down, or pulling their car over for a random search – all in the name of “our safety.” I mean, let’s face it, if you are already okay with Big Gov down your pants at the airport and vacuuming up all your digital data, then really, you might as well let them in your house, in your car, and up your ass.

A quote from Snowden in that article is one of the best logical arguments I have read in defense of your personal rights. It’s even a shame we have to talk about defending them at all. Be that as it may, here is the quote:

Some people take the position that they “don’t have anything to hide,” but when you say that, “You’re inverting the model of responsibility for how rights work.” When you say, ‘I have nothing to hide,’ you’re saying, ‘I don’t care about this right.’ You’re saying, ‘I don’t have this right, because I’ve got to the point where I have to justify it.’ The way rights work is, the government has to justify its intrusion into your rights.

In other words, people who say you need to defend a natural born right to privacy by saying they have nothing to hide are doing it wrong. They are saying, essentially, that if you don’t want the Government to read all of your communications, then you must be guilty until proven innocent, therefore Government’s intrusion is acceptable. Last I checked, we are innocent until proven guilty, and that is why the Government does not have the right to suck up every byte of your data into their server farms for analysis and indefinite retention.

The 4th Amendment states that we are secure in our, “persons, houses, papers, and effects.” Just because our “papers” are digital via email and text makes no difference. Saying that the NSA has the right to read your emails and texts because it travels over the public internet is like saying the Post Office has always had the right to open all your mail and photocopy the front and back side of every letter that every American has ever sent to anyone. Email versus snail mail is a distinction without a difference, both are your “papers” and the 4th Amendment guarantees you the right to be secure in them, and right now, under this Government, we are not. Liberals that try to make a distinction are simply trying to reconcile in their own mind an uncomfortable and obvious dissonance with reality.

If you encounter such a Liberal, simply ask them if a reasonable solution would be for us to stop using email and write everything by hand and send it through the post office? If they disagree with that, then ask them to explain the difference between the privacy rights of snail mail versus email again. If they do agree with that, then back away from them slowly and don’t make any sudden moves.

The way the law used to work, under the Constitution, was that an agency such as the NSA, or even the police, needed to have probable cause to collect your data, enter your home, stop you on the street or search your car. In the case of your private property, they need a warrant signed by a judge that has assessed the probable cause and determined that it warrants an additional search. Probable cause is evidence of being guilty, therefore, if the Government can enter your home without a warrant, then the assumption, the “probable cause” without the warrant, is that you are already guilty, of something, of anything, and they won’t know what that is until they find it. That’s not how this country was founded, and that is not your birthright.

If you believe the Government does or should have this right, then I’ll gladly buy you a one-way ticket to North Korea because you were surely born in the wrong country my friend. Countries for you already exist, no need to convert this one. Do us a favor and just leave for one of them.

In the article, Snowden goes on to strongly recommend we discontinue using Dropbox, Google, and Facebook. When this man speaks, I listen. I am currently in the process of converting my Dropbox, I never had a Facebook account, and as much as I enjoy the accuracy of Google’s search engine – it’s time to opt out. If enough people abandon these services, newer, better, more encrypted services will come along.

Snowden recommends Spideroak for cloud storage, and RedPhone or SilentCircle for secure, encrypted text messaging. I advise everyone to discontinue all dangerous Government surveilled services immediately and migrate to these more secure, encrypted services. And I don’t want to hear pansies whining about how it doesn’t matter because the Government can hack anything because all that really means is that your just lazy. Just because you might have to make some effort, you suddenly have top secret security access and are an inside expert on the intricacies of every Government surveillance capability in the world. So what is more likely…a sudden 130 IQ, or you’re just a lazy ass?

And if you think the recent acquisition of Congress by the Republicans is going to make any difference at all, you are soundly mistaken. Democrat Obama extended The Patriot Act and the Republican House just this year voted to keep the NSA dragnet. So you tell me, what’s the difference between Democrats and Republicans anymore? None, Comrade. 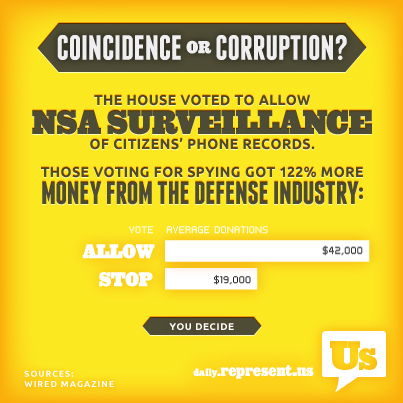 Like Loading...
‹ CEO says Government is Lying – Government gives him a talkin’ to
The Truth About Net Neutrality ›