Stupidity of Illinois Freeways, Precrimes and TSA Fun for 2015 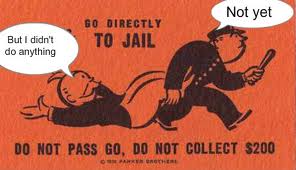 There’s just been so much bad news in the past few months, I just haven’t had the desire to post any of it. At some point, it all becomes sort of depressing. As I have said to others many times, and this continues to be a true statement daily, any action the Government takes is only ever to increase its control or its wealth. Never an act for freedom. Never an act for transparency. Never an act to pay down debt. Never an act to end 20 years of daily war. All laws, all bills, all actions, all decisions must always expand Government control or wealth. Every day. All day.

I’ve been traveling for work this summer and I’ve just come across so much. I see Government intervention in the economy and our lives everywhere I turn. I see more and more precrime, where laws exist that punish someone before an actual crime is committed. Cops will never question the laws they enforce, so we can never expect them to use reason and see what is happening to our rule of law. They are told to point. They point. They are told to shoot. They shoot. That’s what they do. There is no Government agency that wants a cop capable of rational, ethical thought. As far as precrime goes, it’s gotten so that I think I could write a short book on them at this point.

I was driving down a freeway in Illinois. They had a digital sign that said, “OBEY SPEED LAWS.” I felt like I was in an Orwell novel. Obey. I hate that word. I hate it even more from a Government agency. Speeding laws are precrimes. Speeding does not violate the sovereign rights of an individual. Hitting them does. If you hit someone and you were “exceeding a safe speed” then you would be charged with that, at the time you actually committed the crime. The reality is that speed laws are unethical precrimes that exist to generate supplemental revenue for police agencies and to reduce insurance company claim liabilities and raise premiums. That’s it. That’s all. But I have a whole ‘nother post regarding the unethical nature of speed limit laws. We need to blow the dust off our brains, break out our thinking caps from the attic and really THINK about the laws and the Governments that exist today. Apply reason, logic and rational thought to many daily observations and you will be SHOCKED as to how absurd they really are. Reject your programming.

For example, the Autobahn has no speed limit in most sections and…

The annual fatality rate on the Autobahn in 2.7 per billion kilometers traveled. The United States has a 4.5 fatality rate for the same distance and highly controlled speeds to boot.

Now most people have been brainwashed to just respond with, “Well it only makes sense that speed limits would lower the number of accidents.” Does it? Are you sure? How sure are you? Would you bet a year’s salary on that right this second? And yet, none of those people can cite me any actual data to support that. I am not saying that data doesn’t exist, it may, but what I am saying is that people blurt out bullshit they’ve never spent anytime really thinking about and don’t even realize they are just regurgitating vomit because that is what they’ve been told their entire life without a shred of anything to back it up.

Illinois also had many signs that said, “MOVE OVER FOR EMERGENCY VEHICLES. IT’S THE LAW.” Why? Why just emergency vehicles? Shouldn’t we move over a lane on the freeway for a pregnant mother changing a tire on the side of the road with two toddlers just as much as a police car giving someone a ticket? Why only “emergency vehicles” which by default are going to be unionized government employees most of the time. Are the lives of union and/or Government employees more valuable than a mom or dad or anyone else that happens to be on the side of the road, so much so that we have to make signs to remind us it’s only a law to move over and allow a safe distance for government employees? Everyone else, feel free to do 65 mph just six inches from their driver door…no laws broken there. Why doesn’t the sign just say, “MOVE OVER FOR VEHICLES IN EMERGENCY LANE.” Wouldn’t that be the safe, prudent, ethical thing to do?

Why did IL have a sign threatening $10,000 in fines and up to 14 years in jail for hitting a road construction worker, specifically? Shouldn’t hitting anyone be a crime? If I murder someone, are we saying that some murder is better or worse than other murder? Is Illinois saying that murdering a labor unionized construction worker is “worse” murder than murdering a private sector guy on the side of the road changing a tire? Murder is murder. Why does Government insist on carving out certain classes of people for special privileges over other classes of people?

I was getting my weekly TSA shiatsu while traveling last month since I refuse to use the full body scanners. The TSA pimp at one airport decided to educate me on the fact that I was getting more radiation from flying at 40,000 feet than I was from the scanning machine. I have several problems with this.

Second, I am also trusting Government employees or private employees with a Government contract they don’t want to lose to be calibrating the machine and checking its safety devices so it does not emit more radiation than it should. How many times a year do we hear about roller coaster and water park accidents – and those rides are checked daily for safety by people very interested in not having their employer wiped out by a lawsuit. Still, it happens. But we can see it as soon as it does. So how often is the safety of the scanners compromised by human error, and we don’t see it? If a scanner was emitting radiation above safe levels for six months before it was caught, how would we ever measure the total damage or make reparations? We wouldn’t. We couldn’t. The TSA would get a slap on the wrist, and it would be swept under the carpet just like Hillary’s email server problems, just like Benghazi, just like the IRS targeting the Tea Party, just like the FBI gun running operation Fast & Furious, just like the Clinton Foundation scandal, just like Solyndra, just like the VA scandal, etc….

So why take that chance? Knowing most (not all) Government employees suck at their jobs and no matter how bad they do something, they will never be held accountable for it, why would I risk it when for an additional 5 minutes of my time I can avoid the risk entirely? Why trust that to some other human I don’t know, probably won’t like, that is probably making minimum wage and always will? Why would I do that? Would you trust putting your kid on a roller coaster that was checked by a Government employee at a park that could never be shutdown no matter how many people died there and the employees would never lose their jobs?

Third, just because I am getting radiation in the air doesn’t mean I should just say “fuck it” and take the dose on the ground as well. How is that a rational decision? That’s like saying that I already had a Twinkie this morning, so what difference is polishing off this bag of Doritos going to make? But…this is how Government employees think. Why else would he say something that stupid?

Fourth, they are focusing on “educating” that segment of the public that continues to exercise its last thread of rights to opt out (for as long as that lasts) by using the plane radiation argument. Why? Because they are too stupid to engage in a rational discussion regarding the 4th Amendment violations of the scanners. That would require an understanding of the 4th Amendment, first off, and there is a danger there to the Government brainwash machine that if you teach a TSA agent about the 4th Amendment in order to teach them how it is not relevant, you may actually not be successful. Better to keep TSA agents ignorant of the Constitutional protections they violate everyday and stick to simple, albeit immature arguments, regarding radiation dosing.

Like Loading...
‹ Corrupt California Government Assaults Uber – National ID Cards & Leaderless Organizations
State of the Union 2015 – Republicans Have The Power! – We Are Doomed ›