Home › Economy › What Caused Our Economic Collapse in a Nutshell

What Caused Our Economic Collapse in a Nutshell

The fact is, the entire housing bubble and the economic collapse were caused entirely by our own Federal Government. People are blaming capitalism but we no longer have capitalism, we have CRONY-capitalism, aka Corporate Fascism, where the government bails out the banks and corporations while the banks and corporations do the bidding of the government for favors, protection from domestic and foreign competition and bailout money.

This is NOT capitalism. Capitalism requires a free-market without government intervention. If we had real capitalism, the housing bubble and the recession would not have happened. 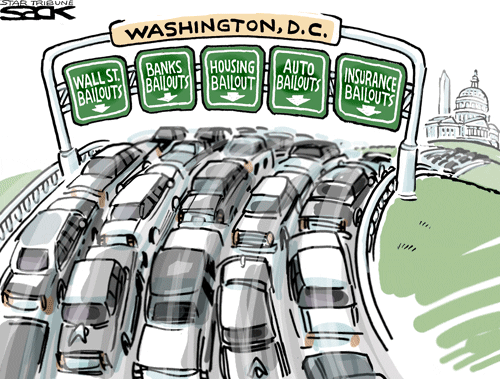 If we had capitalism, corporations would not be able to use Government rules, regulation and taxation to make sure their competition cannot survive. Without competition, corporations are able to create monopolies, control prices and limit your choices, and they partner with government to that end. Government is happy to oblige in exchange for their obedience, campaign finance contributions and not interfering in Big Government and its expansion. It is competition, from capitalism, which prevents corrupted corporations, and Government, from existing. Do not blame capitalism, blame your Government for removing capitalism.

I’m not excusing Wall Street and the Banks from blame. I’m saying that our own Government sent out the invites, provided the drugs and booze, and everyone else just showed up for the party. If the government had stayed out of the private sector, and not created the incentive and the opportunity for businesses to run wild, it would not have happened.

Have you ever heard the Government admit that it made a mistake? Think about that for a second. I never have. Is it possible it’s never made a mistake? No, that’s not possible, which means either their decisions that created this economic collapse were intentional or they have no idea what they are doing and won’t admit it. Both of those possibilities are frightening.

The following timeline of events is the truth that caused the economic collapse. While I begin this with the Community Reinvestment Act, there is a long list of government failures and bad government incentives that led to the destruction of the economy through government distorting and manipulating free-market capitalism.

And the genius of this plan? The Government and their media pundits and Hollywood allies turn around and blame capitalism for creating the entire mess, when in fact we have not been practicing capitalism for decades. And what does demonizing capitalism produce? Movements like  Occupy Wall Street that want to bring down capitalism and raise the flag of socialism, turning to the Government for the answer to all their problems while never realizing that capitalism is dead, and Government is what killed it, and created this nightmare we live in.

I apologize that the list is long, but this is the smallest nutshell I could make it and still give you enough details to see what happened. Items in red are highlighting major government distortions and destruction of true free market Capitalism.

Please see attached file by clicking here and found at this website for information on how the Federal government was controlling the expansion of banks if they were not meeting their Community Reinvestment Act of 1977 quotas. Article is from 2001. Excerpt below from Section 4: Enforcement.

4. The federal banking agencies enforce the CRA by examining the CRA record of a bank, issuing a written report with a rating, and taking the banks CRA record into account when considering the banks application to expand its business.

As part of their regulatory function, the federal banking agencies periodically send examiners to a bank to determine whether it is in compliance with the banking laws, including the CRA. At the end of the CRA examination, the agency issues a written report describing its findings and containing one of four ratings: outstanding record of meeting community credit needs; satisfactory record; needs to improve; and substantial non-compliance. In addition to these periodic examinations, the federal banking agencies also evaluate certain bank expansion applications to ensure that the bank is capable of expanding and qualified to do so. One of the issues the agencies consider when a bank applies to expand its business is the banks CRA record. An agency may deny an application if a bank has a poor CRA record or condition approval on improved performance.

Click here for the definition of blackmail…“exert pressure on someone through threats.”