UPDATE: 06/12/14 – SoCalGas broke the link I have below, so here is a new one to an OC Register article about the contract negotiations. This is what SoCalGas put on the table, that was rejected (at that time), by the Labor Union thugs:

Almost nobody in the private sector gets these kinds of benefits. Nothing is special about SoCalGas that its employees should demand gold and gemstone pensions and insurance coverage from their employer. SoCaGas is just a company like any other company, and its employees are the same as any employees in any other company. They aren’t special. When Unions threaten and leverage a private company to force exorbitant benefits to rain down upon them like diamonds from heaven, that can only come out of OUR pockets in the form of higher utility bills.

I vote to dissolve the SoGalGas Union immediately, or SoCalGas. Allow multiple private companies to compete against each other in a free market, and if SoCalGas union employees have trouble duplicating their salary in the REAL WORLD, which they will, well heck, they can come and ask for their old jobs back, without a union, for whatever pay they can get, from whatever Phoenix arises from the ashes of their company or their Union.

As usual for Labor Unions, SoCalGas has made what appears to be a ridiculously generous offer to their Labor Union workers and the workers continue to sneer down their nose and reject it. Let’s see what else was in their goodie bag:

I work for a very large private company that has locations all over the United States. We did alright last year, but almost all of our profit was chewed up complying with several new government regulations in 2011. As a result we averaged $0 for our annual Christmas Bonus. That was on top of our lousy but at least existent 1.24% annual increase in 2011 against a real rate of inflation of 6%.

Meanwhile, Labor Union employees continue to make ridiculous demands for things that don’t exist on the rest of the planet. So not only are the rest of us taking effective pay cuts, and paying more with less for everything we buy, but now our natural gas bill will go up so some of our money can be diverted to their pay raises, pensions and healthcare benefits. 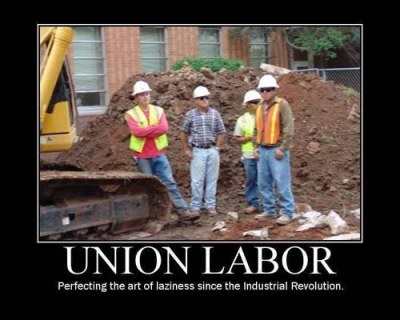 I loathe Government Agency Union Workers pay, pensions and healthcare benefits because 100% of it is paid with our money, and all we get in return, if anything, are headaches or pathetic service.

I realize that SoCalGas is not a government agency, and that they do provide a product in exchange, but since they have a monopoly on the natural gas here I don’t have a choice. Since there is no competition here for me to choose from, they might as well be a government agency. Perhaps if there was some competition, they would think twice about turning down a 13% guaranteed pay increase.