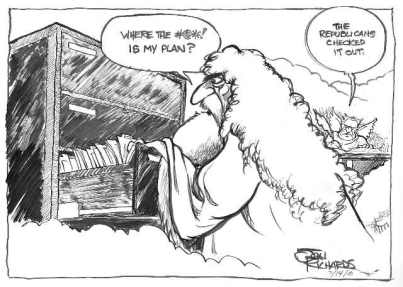 Throughout the last seven years of my self motivated re-educational campaign that has opened my eyes wide to the tyrannical boot we all live under that is our Government, it never occurred to me until last month how to more easily explain one of the most glaring problems with the Republican Party, and why they have been, and forever will be, sidelined to insignificance allowing the Democrats to rule with a fascist iron fist.

Simply put, the Republican platform is based on a repeal of the First Amendment, and a majority of Americans have a problem with that.

We all know that the Republicans kowtow to the “bible belt” and that their support is based largely on the religious right. They did this because they must somehow differentiate themselves from the Democrats and as several cornerstones of the Democrat platform involve concepts and legislation that are anathema to religious piety, the path of least resistance for the Republicans was to appeal to the opposing side.

In doing so, the Republicans unintentionally adopted a platform, the cornerstone of which, was the repealing of the First Amendment. The majority of Americans, both religious and secular, are hard-working, responsible, and family oriented. Hard working Americans reject the Democratic platform of centralized command and control Government based on the creation and expansion of a welfare state to be paid for through wealth redistribution.  However, many of these same hard-working Americans do not have a problem with gay people, abortion, stem cell research, birth control or saying Merry Christmas while opening presents from Santa Clause. At a minimum, these same Americans simply believe that everyone should mind their own business, that it’s not for them to say what other people should do or believe, just as other people should not tell them what to do or believe. In layman’s terms, freedom.

While the Democrats promise to give everyone, every one else’s money, the Republicans promise to pass laws that are based on nothing more than a belief in God. As wrong as the Democrats are, at least their platform is not based on subjecting every American, theist or no, to kneel before mysticism. Every law that Republicans would pass if they were given the control to do so would violate every other Americans protection under the First Amendment which means that if these laws are passed, Republicans would be repealing the First Amendment by proxy and establishing a National Religion.

Unfortunately for Republicans, the majority of hard-working Americans, religious or no, have a very big problem with that. By forcing Americans to choose between accepting Christianity into their lives or holding their nose as the Democrats rob them blind, the majority of Americans either refuse to vote at all or can’t possibly vote Republican because the Republican mystic platform requires them to say asinine things like, “I came to realize that life is that gift from God and I think even when life begins in that horrible situation of rape, that it is something that God intended to happen.”

Of course they have to admit that life created by rape is a gift from God because their religion requires them to believe that all life is sacred and part of God’s plan, which only makes the other Republicans that try to split the difference by saying that abortion is okay in cases of rape look like absolute fools! Are we supposed to believe that God faxed these special Republicans a memo updating his ‘master plan’ to carve out an exception for rape? On just this issue alone, a Republican can only choose between looking like a religious fanatic from the Dark Ages or a pompous narcissist who has the audacity to speak for God, which even his own religion says he cannot do. What fools are the Republican Party!

The Republicans refuse to abandon this forever losing strategy for one of two reasons. Either this is their strategy because the line between Democrat and Republican is only for our own personal amusement as they work together in mutual accord toward the common goal of corporate fascism, or their silver-spooned aristocratical lives have simply distanced them too far from The People to ever have any chance of their party recovering from irrelevance. Personally, I believe the former.

However, I suppose we, and McDonalds, should be grateful that we only have to deal with mystic laws regarding abortion and gays since the bible, by dumb luck, does not require us to sacrifice our first-born children or hold cows sacred.

Like Loading...
‹ Hey, I guess it could be worse…I want the right to carry a gun, while an Icelandic girl wants the right to her own name…
If You Earn A Paycheck – Obama’s Fiscal Cliff “Compromise” Raised Your Taxes – Liberals Enraged – “We thought it was just the rich was going to pay!” ›