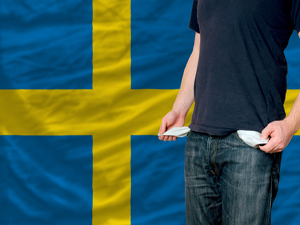 Liberals, sentamentalists and dew-soaked honey dripping altruists like to point to Sweden as the poster kid for why we need Socialized Medicine.

Read the article below, and more importantly, read the comments from those in Poland and Australia and Canada who are all trying to warn Americans how bad their socialized medicine is. A fact that none of the mainstream news media state propaganda outlets will inform us about. If I believed in God, I would be on my knees every night thanking him for the internet. Thank you. Thank you. Thank you.

The Market is Taking Over Sweden’s Health Care

While contemporary mythology has it otherwise, the market is not a distinct phenomenon: it is what exists when people interact and otherwise voluntarily transact with each other. The broad definition of the market is simply what people (choose to) do when they are not forced to do otherwise. So it is not surprising that even the Soviet Union, “despite” its anti-market rhetoric, fundamentally relied on markets: foreign markets for prices to guide planners’ economic calculation, and domestic black markets for resource allocation and goods distribution according to people’s real needs and preferences. The black market, indeed, was “a major structural feature” of the Soviet economy.

In other words, we should expect to see markets wherever governments fail. Or, to put it more accurately, markets exist where government cannot sufficiently repress or otherwise crowd out voluntary exchange.

So it should be no surprise that, as The Local reports, Swedes en masse get private health care insurance on the side of the failing welfare systems. This is indirectly a result of the relatively vast liberalization of the Swedish economy over the course of the past 20 years (as I have noted here and here), which has resulted in the “experimental” privatization of several hospitals (even one emergency hospital is privately owned). While previously only the political elite (primarily, members of the Riksdag, the Swedish parliament) had access to private health care through insurance, the country now sees a blossoming and healthy insurance market.

Private health care insurance was initially offered to employees as part of employers’ benefits packages, since this ensured direct access to care when needed, and a faster return to work. This trend was easily recognizable in service sectors heavily dependent on the skill and knowledge of individual employees. Working as a professional consultant in Sweden in the late 1990s and 2000s, I personally experienced and benefited from such private health care insurance through my employer. This type of very affordable insurance provided same-day appointment with GPs and specialists alike, whereas going to the public hospital would have entailed waiting in line during the overcrowded “open access” times or waits of perhaps a week or more to see a GP.

My experience is first-hand with both alternatives, and they were at the time as different as night and day. While talking heads in the media cried out that private insurance created a “fast track” for “the rich,” the net effect for the already overwhelmed public health care system was relief through decreased demand. As we should expect from any shift toward market, everybody was ultimately better off thanks to this (limited) marketization of Swedish health care (perhaps excepting bureaucrats who previously enjoyed the power to directly control health care).

Swedes maintain that they get good (they mean great) health care, and the statistics partly confirm this. In fact, Sweden’s health care was recently noted as the tenth most efficient in the world (excluding smaller countries). The decentralized regional system of government (regional governments, taxing incomes in the range 10-12 percent, are primarily responsible for health care, public transport, and cultural subsidies) has undoubtedly contributed to this, especially since the national voucher/guarantee system enacted in 1992 has increased competition between regions and thereby placed pressure on politicians and hospital administration.

The fact that one in every ten people voluntarily foregoes care even though they need it, according to the regulating authority Socialstyrelsen’s status report 2011 (3 percent of whom could not afford care, p. 64), should also lessen the pressure on the health care system. It should also be noted that Swedish bureaucracy overall is comparatively effective and efficient (likely a result of the country being very small and having a long tradition of both governmental transparency and a hardworking population), so why would this not also be the case in health care?

The main problem is naturally due to the central planning of health care, whether or not it is planned by regional “competing” governments. While access and quality are guaranteed by national law, Swedes usually have to line up for care. As noted above, wait times may be days or weeks for appointments with GPs while several (or many, and increasing) hours for ER care, but the real problem is apparent in specialist care such as surgery where wait times are not uncommonly several months, or even years.

Swedish media frequently reports on cases of mistreatment, extreme wait times, and deaths due to not being offered care in time. An increasingly common phenomenon is denying the severely ill ambulance for all sorts of symptoms, for example severe burns, blood poisoning, myocardial infarction (1, 2), or stroke.

Even an otherwise laudatory article in The New York Times notes how wait times are the problem in Swedish health care. This remains a major shortcoming despite the national “health care guarantee” (guaranteed care within 90 days). As in any market where consumption is subsidized through artificially low (or no) fees, demand skyrockets and there is simply no way for suppliers of the service to keep up with it.

Private insurance and (semi-)private hospitals in this sense offers relief for an otherwise unsustainable system; their net effect is lower demand on public hospitals, which should make life easier for many in Sweden. Access used to be more difficult, except for those who could skip the regular system by taking advantage of personal relationships or family bonds with physicians, nurses, and other hospital personnel. My personal experience speaks to this latter fact, though it generally is dismissed by Swedes wanting to believe in the system. The fact that “knowing the right people” can open doors is irrefutable, however. And it is important in socialized systems.

A Constant Lack of Funds

As in the NYT article, all problems including the wait times are generally blamed on a “lack” of funds. As Jonsson and Banta note, “limited resources do result in waiting lists and other restrictions.” In the media and political discourse, this is discussed as “cutbacks,” but yet the funds seem to never be enough.

This is symptomatic for any public system — the allocated funds are never (and can never be) sufficient. There is simply too much waste due to lack of incentives and market prices. In order to deal with health care’s runaway costs (or pressure to cut costs, depending on one’s view), health care providers tend to employ the same techniques as others subjected to a public primarily one-payer system. These techniques may vary over time and can be different in different places, but they all amount to exploiting loopholes or in other ways circumvent the system’s limitations. One such technique includes a type of “creative” accounting to up the hospital’s cash inflow by indicating in the patient’s medical records a more expensive treatment than the one actually given. One treatment on the books, another off the books.

This is of course an expected outcome of a centrally planned system with relatively limited health care user fees (contrary to popular myth, Sweden’s health care is not “free”). When Swedes get health care, it is generally of quite good quality. But to get it, they need the right connections, or insurance. The former offers no guarantee but only a relative improvement, while the latter is a proper market contract. No wonder Swedes take advantage of their newfound opportunity to have health care insurance.

The Future: Sweden or the United States?

Liberals tend to point to Sweden as a good example of how well an extensive welfare state functions. They are not completely wrong, since Sweden is a rather well-functioning country. But this is despite the welfare state; these live in the past, and assert that Sweden today is one part in the 1970s and two parts their own imagination. The fact is that the Swedish welfare state imploded in the early 1990s; it was crushed under its own weight after more than two decades of rapid decline.

The reason Sweden is doing so well at present is partly an illusion and partly a market story. It is an illusion since what other countries we have to compare with are also welfare states (or, as in the case of the United States, a warfare-welfare state); being best of the worst does not mean one is actually good. It is a market story since Sweden has for more than two decades consistently rolled back the welfare state, introduced market prices and private ownership, “experimented” with market-like incentives for public providers, and cut taxes

What Sweden has done is hardly sufficient, but it appears to be in the right direction. More importantly, it is in a direction not taken by many other countries — and this explains the country’s relatively strong financial condition.

When the United States is firmly going down the road to serfdom, the market appears to be taking over Sweden’s health care.

Like Loading...
‹ Justin Bieber Attacked by Democracy
State of the Union – Obama’s myRA – Buy Bombs & Save For Retirement AT THE SAME TIME! ›