Home › Tea Party › “All Politics Is Local” – Not With Tea Partiers

“All Politics Is Local” – Not With Tea Partiers

Tip O’Neill once commented, “All politics is local,” after his defeat at Boston College running for a seat on the Cambridge City Council. That would stand forever as his one and only defeat.

However, with the help of technology, the politics of today is proving to be different.

As each local election in small towns across America takes place, the organized nationwide network of Tea Partiers funnels money and resources from cities all around the country.

By drawing on everyday Americans wielding their $25 and $50 donations from New York to California, small town elections are being heavily influenced by Tea Party policies.

This is a great thing.

Most local politicians are backed by the fat wallets of either the Democrat or Republican parties. They pretty much get to choose who wins in their primaries and then spend oodles during the election. Due to this, most of us have been disenfranchised and rarely ever participate. We feel like the deck is stacked, so why play? The Tea Party has upset this entire playbook by siphoning money from all over the country to battle out each local election.

Because of that, we have seen several impressive upsets including Republican backed shoe-ins being replaced by Tea Party supported newcomers. The Republican and Democrat Party leadership juggernauts have lost full control of who gets in and who doesn’t.

Case in point, Sharron Angle is currently running against Harry Reid. You remember him. He’s the one that brought us our wonderful budget-busting health care reform bill, guaranteed to make getting sick that much more dangerous. The Tea Party wants him gone, and so they’ve thrown their weight behind Sharron Angle, and as the image shows below, money is flowing into her Nevada campaign from all over the country.

The local CBS affiliate in Reno, NV has aired a report expressing their awe at the power of the tea party movement to have an impact on the vital U.S. Senate race to Defeat Harry Reid in Nevada.

Every red dot is at least one donation over $100, from states outside of Nevada. 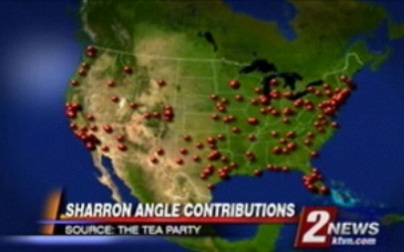 This time, an average American while on a laptop and watching the NBA playoffs in New York can wield tremendous influence on the replacement of a political party hack that helped destroy this country in Nevada, or anywhere else, with a small donation, a click, and a smile.

Like Loading...
‹ Students Block Traffic to Take Away Your Rights and How to Resolve Every Error in the Cosmos
Federal Government Reinflates Housing Bubble ›