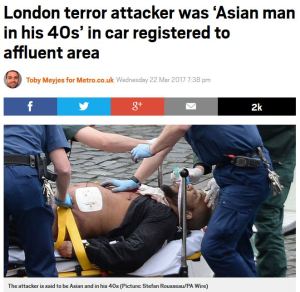 Yesterday an Asian male drove a car into a crowd of people, then jumped out and started stabbing a bunch of white people. Fortunately, only four people were killed and twenty-nine injured. Sadly, we now say fortunately when death tolls are low, because attacks themselves are so common.

Will China or Japan or any of the other Asian nations release statements condemning this behavior? In fact, it appears that it was an “affluent” Asian that attacked London – and I know there are many upper middle class Asians in the United States. If terror attacks have now spread to Asian terrorists, perhaps Americans should rethink their relationships with Asian-Americans, re-evaluate our immigration policy from Asian nations and keep an eye on our Asian co-workers and Asian neighbors.

Or perhaps, the nut-wing Liberal Democrat left should not use the word “Asian” to describe a Middle Eastern terrorist. How about we start with that? The Nazi-Left ran with a quote from somebody saying the individual was Asian and never bothered to correct that statement. Sloppy journalism? Intentionally sloppy journalism? Trying to re-write who we should be scared of by calling Middle Easterners “Asian” now because they are on the Eurasian continent? Is that so Europe can continue to let unvetted Middle Eastern single young male immigrants infiltrate their nations because its the “Asians” that are killing people, not Middle Easterners? This better not become a Lefty trend and this was a trial balloon to see how well it works.

How do Asians feel about being in a headline associated with a deadly terror attack?  CNBC bent over backwards in their article to not identify the attacker at all, in any way. I guess that’s better than saying “Asian” but by now, surely, we know who he is and what he is.

I guess I should be happy he’s not being called “white hispanic” like CNN kept calling George Zimmerman after he shot Trayvon Martin.

Maybe this is a good thing for white people, or white hispanics, or white blacks or whatever we are since its always our fault when something bad happens. I mean…Asians have been left out of the hate loop for long enough. They are more successful, wealthier and more educated than white people so hey – it’s only fair the Liberal Left finds some Hate-Love for them too, so why not align Asians in everyone’s mind with terrorists. At least white people can  catch a break between our beatings.

Lastly, he was able to keep stabbing people with impunity until he finally came across one with a gun. #GunsKill. Bad guys.

Like Loading...
‹ Filing taxes could be free and simple. But H&R Block and Intuit are still lobbying against it.
Amazon & Walmart Drive Down Healthcare Insurance Prices ›