Home › Tea Party › Tea Party Gets Revenge At The Rally To Restore Sanity in Washington, D.C.

Tea Party Gets Revenge At The Rally To Restore Sanity in Washington, D.C.

Let me just start with, prior to 2005, I wouldn’t have known what the sign on the video below meant either. It is time for all of us to stop being UNDEReducated.

From time to time I am sent  video links of individuals at Tea Party rallies being asked on camera by an interviewer to explain the signs they’re holding, or asked questions about government policy or U.S. history. On these clips, they show their ignorance of the topic, now captured on video, and then put on YouTube and the 6 o’clock news.

Obviously, anyone who answered the interviewers question correctly was conveniently left off the final video. The purpose of such videos is to make all Tea Party people look ignorant to the greater public thus undermining the movement’s credibility.

What I want to show here, is that any group trying to rally for anything can be made to look uneducated on such videos and today is the Democrats turn to look stupid. 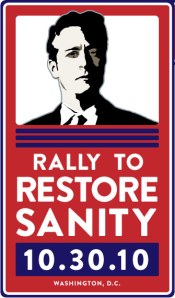 This was shot at the Rally to Restore Sanity event in Washington D.C. last Saturday, hosted by John Stewart. Many of the attendees were supporters of Obama and his administration’s policies. The same policies that the Tea Party feels are destroying this country, including Keynesianism.

The difference between this video and videos that others shoot to make the Tea Party look bad is that I won’t pretend that people who answered this question correctly weren’t left off the final video. I am sure some people did answer right, and they were cut out.

So please enjoy the following video, as the Tea Party asks attendees of the Rally to Restore Sanity if Obama is in fact, a Keynesian.

The comedy, and the Tea Party revenge, is that the people being interviewed think the sign means Obama was born in Kenya. They don’t understand the sign because they are undereducated. This will require a little background explanation…

Some fringe groups have accused Obama of not being a U.S. citizen, and therefore is not Constitutionally permitted to be the President.

The Tea Party doesn’t care where he was born, and neither do I.

But these small insignificant fringe groups are often videotaped, often in the same manner as the video above, and then published to the masses as representatives of the entire Tea Party movement. This is wrong. These fringe groups do not represent the Tea Party. However, supporters of Obama, having seen these videos and not understanding the Tea Party, wrongly think the Tea Party cares about his birthplace.

What the Tea Party does care about is that our government needs to apply Austrian economic policy immediately, and not the Keynesian economic policies that Obama has been using the past two years. The Tea Party believes Keynesian economics are destroying this country, and that is what the sign is about, not where he was born…and obviously these Obama supporters are completely undereducated on economics, not knowing what Keynesian means, and start attacking the interviewer who was simply asking an economics question, not if Obama was born in Kenya.

Again, I am not saying that nobody answered the question correctly and that their correct answer was then left off the video, what I am saying, is that anyone can go to any rally for just about anything and find enough undereducated people to make a video, and edit it in such a way, that makes them all look stupid in an attempt to destroy the entire movement.

GET UN-UNDEREDUCATED so you can make intelligent, rational decisions on these important policies that impact you, your family and your as yet unborn descendants who will all pay dearly for the bad, undereducated decisions we as a horrifically undereducated society are making today. Our public school system does not educate us on these important issues, and for most of us, college is just a trade school for a professional career. So if educational establishments are not teaching us these important concepts, how will we ever learn about them?

We need to be responsible for ourselves and our children and self-educate. I know that requires a little effort on our part, but we need to suck it up. The last thing a government wants is a population that is well versed in how governments operate and about monetary and fiscal policy. I think our government would prefer a heavily armed population of morons over a defenseless population of intelligent citizens that saw the bullshit our government and politicians perpetrate on us every day. So arm yourselves with knowledge, it’s better than bullets.

I started getting educated on what’s important in 2005, and if you haven’t started yet, you should start right now…with any of the books on the right margin of my blog under Required Reading. A good starter book is Peter Schiff’s, How An Economy Grows and Why It Crashes, shown in the video below…

Like Loading...
‹ Californians Approve Huge Increases in their Income Taxes – What the HELL were you thinking?
Banning The McDonalds Happy Meal Toy – San Fran Decides All Parents Are Too Stupid ›