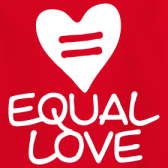 The “old guard” of the GOP has a corner on the market for those constituents who are against gay equality. Unfortunately, having a 100% market share in a disappearing market segment is a long-term strategy for failure. As the Supreme Court begins to hear arguments regarding the Defense of Marriage Act, Rand Paul stands alone as the voice of Libertarian and Constitutional reason within the GOP.

My generation, the X-Gen, and those younger than us, all know someone who is gay. I grew up in rural Connecticut where my school had no black students, was mostly Catholic, and I knew nothing of gay people. In the decades since I have met many gay people, including friends. I participated in two 500 mile bike rides in Alaska and Canada to raise funds for an AIDS Vaccine. I have never had a problem, or a fear, of being around gay people, even on a ride where many gay people were infected with HIV or AIDS…where we shared sinks, showers and bathrooms…shook hands, hugged and high-fived.

My wife and I have been to WeHo to celebrate Halloween and South Beach in Miami, both of which are chock full of drag queens. One of my favorite comedies is Birdcage. We have both had gay employers and attended fabulous parties at their homes.

Gay people have always been here, living among us, they simply weren’t encouraged to come out of the closet. Their numbers are not growing, they are simply choosing to live their lives as gay people out in the open instead of gay people in hiding. Our generation has grown up with them just like the previous generation had grown up with Italians, Germans and Jews. A gay American is no different to us than an American who happens to be Asian, Black, Jewish, short, tall, blind or a hippie.

What the GOP and the religious-right fail to understand is that we are not our parents generation, and we are quickly becoming the wealthy, powerful and influential class in America. How long will the Republicans continue to cling to a vanishing ideology as the rapidly expanding middle and upper classes of working America (you know, the ones with the money) that consist of Libertarians, Tea Partiers and Independents now view the GOP as Dinosaurs in search of an asteroid.

The baby boomers, the old guard, the religious-right…are dying. And with them will die the stereotypical hate for gay people. I often wondered how it was possible for so many people to hate blacks just for being black. The same as I have wondered, as many others have, how the Germans, almost as a singular conscience, could justify and condone the genocide of people just because they were Jewish.

We look back on it now and see that hatred as the product of backward thinking neanderthals, so we assume. But this assumption is wrong. We can look around us today and see the hate people have for gay people, just for being gay. A generation from now, they will be looking back on this time with the same disdain and disgust that we look back at the time of segregation and the holocaust.

Never underestimate the power of religion, group-think, peer pressure, accepted societal norms and fear, to slowly conform a people to justify just about anything, even genocide.

I see the crucible of this particular problem as religion. Religion as it is commonly interpreted does not allow for the existence of gay people without prejudice. As an agnostic, I can dismiss this prejudice easily. Equally as a Libertarian, agnostic or not, I can also dismiss gay prejudice. How?

Libertarians believe that individuals should be left alone. Libertarians believe that the religious affiliation, ethnicity, age, sex and orientation of any individual is not the Federal Government’s business. In fact, any business of any individual is not the Government’s business. It does not matter if a Libertarian is Catholic, Jewish, Muslim or Buddhist…Libertarianism is the belief that we are not slaves to each other, and we shall not enslave each other in any way, regardless of our own personal beliefs and views.

‘Permitting couples to marry when they are of the same gender is a step in the direction of equality before the law, but a truly free society would not have government in the business of defining relationships at all,’ said Libertarian Party Chair Mark Hinkle. ‘Frankly, the idea that someone’s legal rights should depend on whether they’ve entered a government-approved relationship ought to be repugnant to all of us.’

According to the Constitution, the Federal Government is a weak, decentralized power that kneels before the States and The People who hold absolute power. Any law such as gay marriage is left up to each individual State to decide for itself. As attitudes change among Americans, States that continue to support laws that are unpopular will suffer the consequences as people leave those States and businesses follow them in search of labor, taking any taxes those individuals and businesses once paid to that State with them. This encourages other States to pass popular laws (or avoid unpopular ones by watching how they are damaging their sister-States) in an effort to attract individuals and businesses. This is how The Founders designed America. States compete against each other for labor and businesses by experimenting with laws to see what works and what doesn’t.

The religious-right who are not in favor of gay equality have a right to their belief. The Constitution protects them, and I protect them. This is their right. Just as it is our right to believe otherwise. We have no more of a right to oppress them with a pro-gay marriage law at the Federal Level then they do to oppress us with an anti-gay marriage law at the Federal Level. This is why we all have an equal right not to be oppressed by each other, to not be enslaved by each other.

By upholding the Constitution so that these laws are passed at the State level, there is always someplace for someone to live, regardless of their beliefs, without oppression. But when a law is passed at the Federal Level, then one group simply oppresses another group’s right to be left alone, and there is no place to escape to, with today’s oppressed simply become tomorrow’s oppressors.

Ultimately, no Government, whether Federal, State, County, City or Town should create a law defining what an “acceptable” relationship is between two people. We don’t need any Government defining marriage any more than we need them to define friends, lovers, BFF’s, bosom buddies, soul mates, partners-in-crime or fricks and fracks. Relationships between individuals are private and can be solemnized however they see fit, whether it be religiously or not. When Government is not involved, the legal considerations are exceptionally simple. We already sign contracts for cars, credit cards, houses, insurance policies and pest control services. A union of two people that want to share in each others gains and losses, and pass their assets on to each other if the time comes, is a simple contract away, and it’ll be a form shorter than the one you fill out for a credit card.

Freedom. Libertarianism. Constitutionalism. These all mean we are free from imposing our beliefs on someone else. By force, which is what Government is…raw Force. Rand Paul is a Christian, but believes that when it comes to gay marriage, Government should have a “neutral stance” and that it should best be left up to an individual’s religion and church, not the sphere of the Government.